I volunteer at a place we call ‘the centre’. A fellow worker says this name gives it a creepy air, of the Jim Jones variety. Yet it’s apt, as the place looms large for its workers and the community it serves.  This non-government agency is run by a handful of salaried staff and hundreds of volunteers. You’d be astonished by what gets done here on the scent of money. 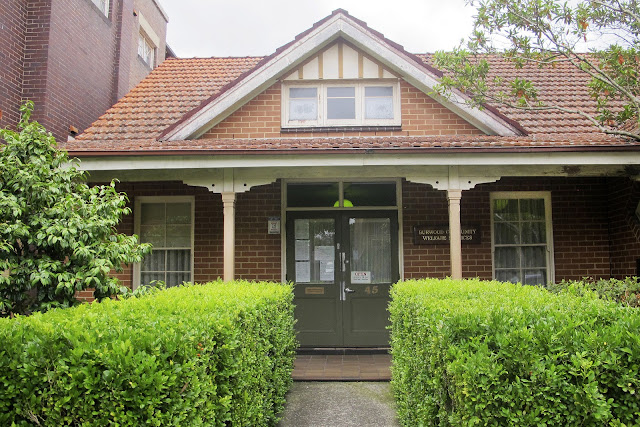 Andrew at the front desk who has been volunteering here for 13 years.... 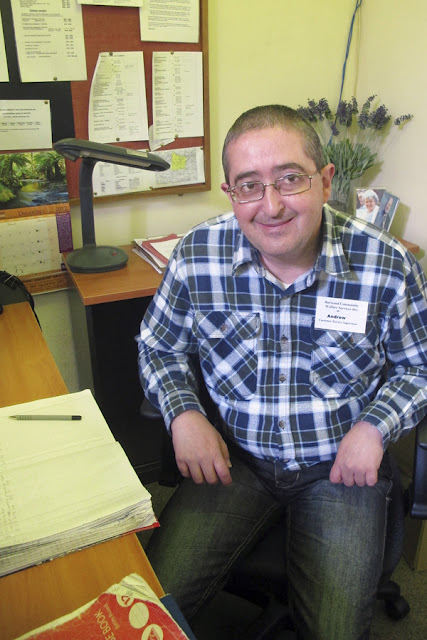 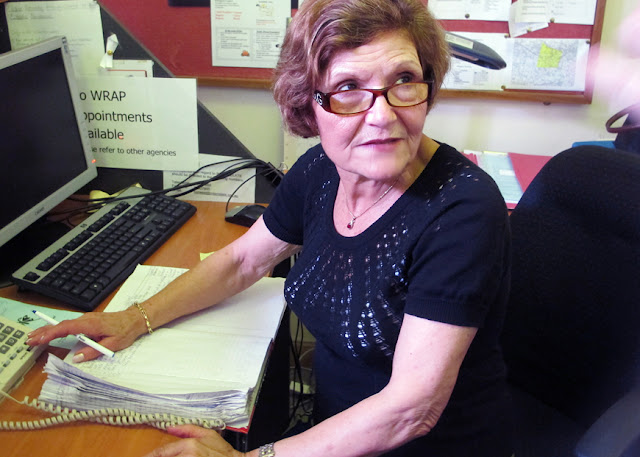 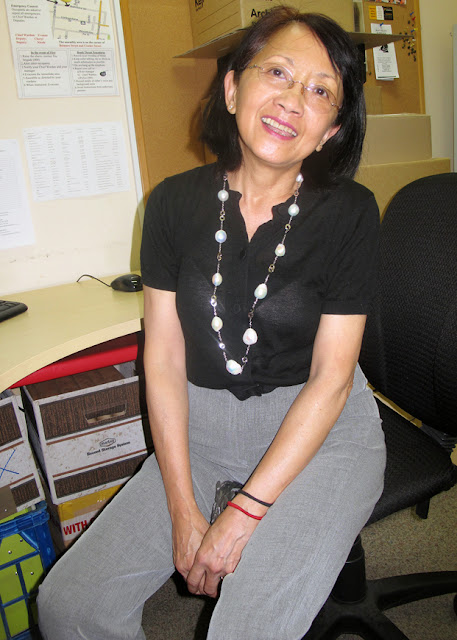 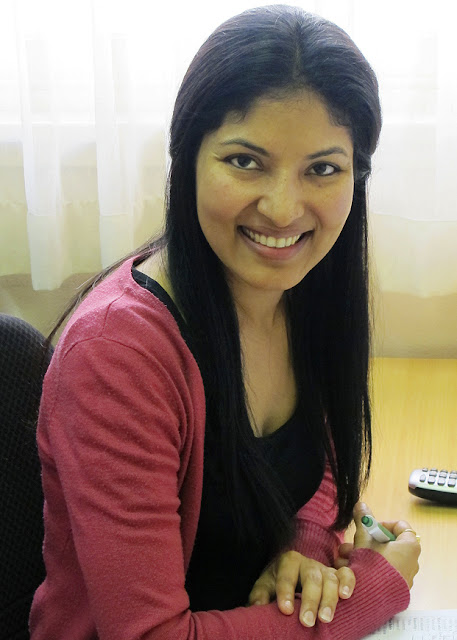 Working on the Welfare Assistance Program. 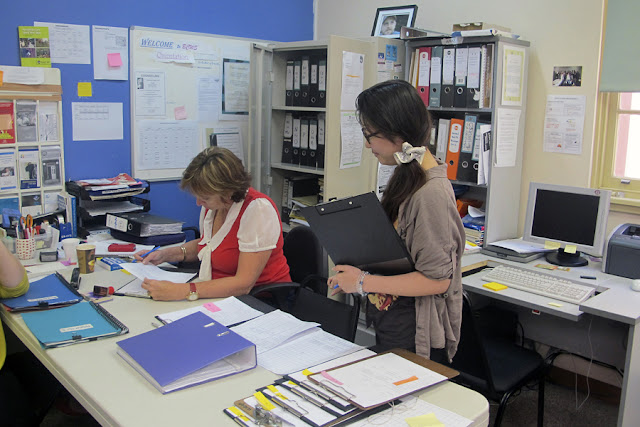 It’s 9.30 am and the volunteers arrive for Meals on Wheels. A small army of volunteers stack their cars with meals which are pureed or not, frozen or hot. There is a runner and a driver. At the age of 94, and after volunteering for nearly twenty years, Alf is still a driver. He says he asks God to control his hand at the wheel every morning and, well, so far so good.

Some years back, Alf and an overseas student rescued a woman who had risen from her chair shortly after the 6 o’clock evening news and fell. She was still lying there when they arrived at 10am with her meal. After her stint in hospital, Alf saw her at a local shopping centre and said they hugged like long lost friends. 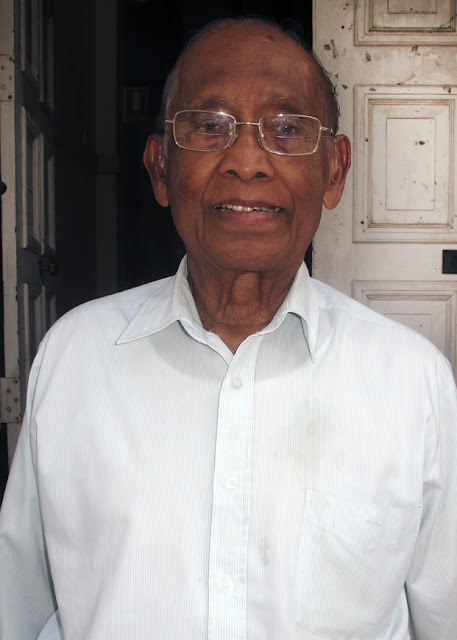 The counselling room has closed for the year and now becomes a storage unit for the Christmas presents and hampers. These are given to clients of the Centre and families in local refuges. People put a lot of thought into these gifts. I remember once admiring the careful assemblage of old bloke food for an 80 year old chap: tasty cheddar, mustard pickles, cured ham, rum ‘n raisin chocolate, salt crackers.

Nic, the centre manager, says requests for gifts and hampers have risen from 339 last year to 454 this year. It’s always touch and go about whether these targets will be reached. Yet some people’s generosity takes our breath away. Yesterday a woman had nine beautifully gift wrapped presents delivered to our door by taxi. 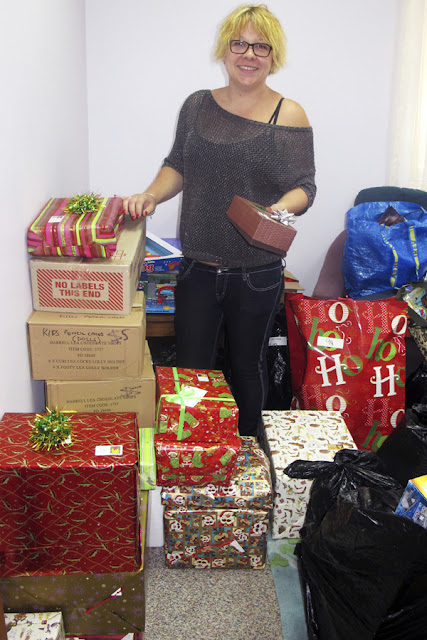 At the centre of ‘the centre’ is a woman of indomitable spirit. She has a gift for people in distress. I have seen her sit quietly beside women and men contorted with rage, frustration, upset, people closer to the edge than any of us could imagine. They become calmer. How does she do it? She’s been ‘doing it’ for 33 years. Today, Christine has agreed to tell me about a man whose photograph she keeps close to her desk. 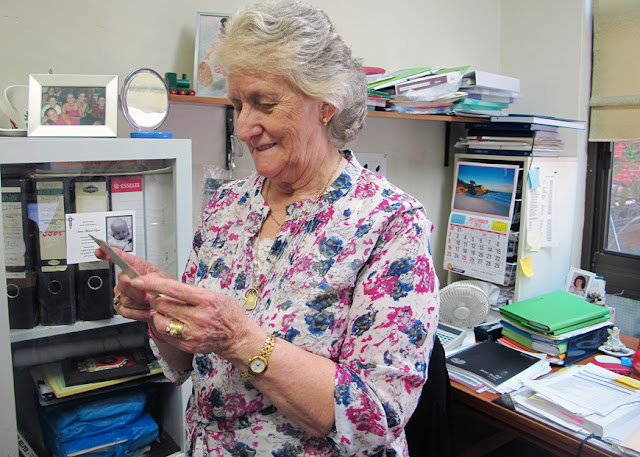 Christine started the service in an old barn nearby and it was there in 1979 when she heard urgent knocking at the front door. She’d stayed back. It was dark, cold and she was alone. She mouthed ‘we’re closed’ but the young man at the door yelled her name and said he needed to talk to her now. He was insistent. Christine said there was something compelling about him so she opened the door.

He came out with it straight away: “I’ve come to tell you that I have to commit suicide. He’d not told anyone before and needed to tell her his story. This was outside Christine’s experience. She told the man it was too much for her and she would have to ask for help. Christine rang an old university friend, Bill, who worked as a chaplain in a gaol and he came right away.

Then Cam told them his story. He was 23 years of age and in his second year at uni. He had a sister and a best friend. There was no difficult history of trauma or violence. He spoke of a wonderful childhood with doting parents of Italian descent but he said he wasn't happy with what he was studying at uni. His grades were okay but he felt he was a failure. He also believed his parents thought him a failure too, even though they never said. But these things were not the point. Cam was adamant he was in such emotional agony he could not continue to live.

Christine says it wasn’t the words he spoke but the feeling she had when he talked about his pain. She said it felt as though his decision had been made and he would not be swayed; as if it was his life and he could do with it whatever he wanted. She says he sounded very sane. Christine was familiar with suicidal behaviour, having worked in three psychiatric hospitals but she says this felt completely different.

She had a quiet word with Bill who confirmed he felt the same. They agreed it was extraordinary because they both felt peaceful about what Cam ultimately intended to do. He had a plan, one he asked Christine to promise not to talk him out of. She understood he would not do anything yet but was able to get him to promise her he’d talk to her first, even if it was simply a matter of saying goodbye.

Cam enjoyed tinkering with radios and televisions and getting them going again. Christine told him these skills could be put to good use in the community. He was on a break from university so said he’d be down the next week to donate his time. Well he never returned to uni. For eighteen months he volunteered at the barn and won everyone’s hearts. He worked for meals on wheels, took pensioners on outings, fixed their radios and televisions. He was gifted with them. Christine talked with him about the possibility of doing social work. He appeared to listen, was always responsive but she was still left with the feeling that he’d made up his mind.

Early one morning in 1981, Christine received a phone call. A member of Burwood council told her a storm had lifted the roof off the barn in the night. He said they were strapping it down; could she please come at once. Then there was a second call. It was Cam. He told her he had rung to say it was time. He said he’d promised to ring her, that he’d enjoyed being with her and now he was saying goodbye. Before she could respond he’d gone.

She rang his friend and sister. They met at the barn and had a quick meeting to discuss where he might be. There were a few places. The police were notified and the alert went out. They found him two days later at Narabeen Lakes. He’d managed to pierce himself through his heart. In a letter he thanked Christine for the last two years of his life but explained that what had come to him during that time had not been enough to take away his pain. Christine was shattered. Cam was nearly the same age as her son.

Cam left her his savings of $3,000 (a fair sum at the time) which he said in the note she was to spend on the elderly, or he’d come back to haunt her. Around about this time, a young man called Jeremy was sent to her by the court to do community service. He had a background in business so Christine told him about the money. She asked him if he could help with finding a bus to take the elderly out on trips. Quite a bit more money needed to be raised and could he help raise that? Jeremy said he'd see what he could do. He returned a week later to say he’d managed to get a new bus without even having to use Cam’s money. The snag was it had to have a McDonalds sign on the side to support the new restaurant that had opened in the area.

So for the next ten years, Christine used Cam’s money to pay for the registration of the bus. It had CAM on the number plates front and back and a great big sign featuring McDonalds on either side. 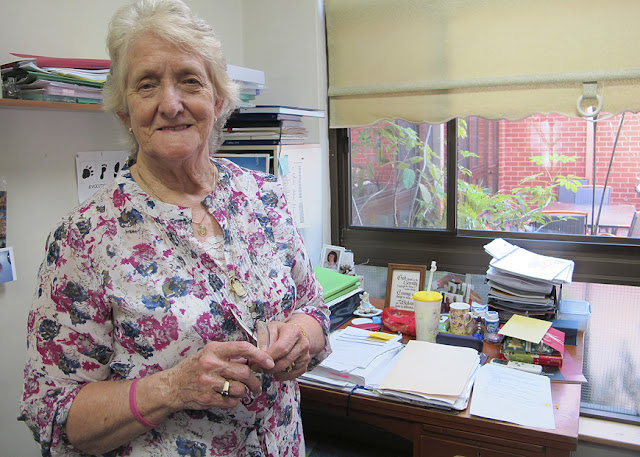 The building will be demolished next year to make way for high rise apartments like these that these that are sprouting along Railway Parade. The Centre will be relocated to new premises next week in a part of Burwood that’s inaccessible by public transport. We are worried that those most in need will not be able to come. 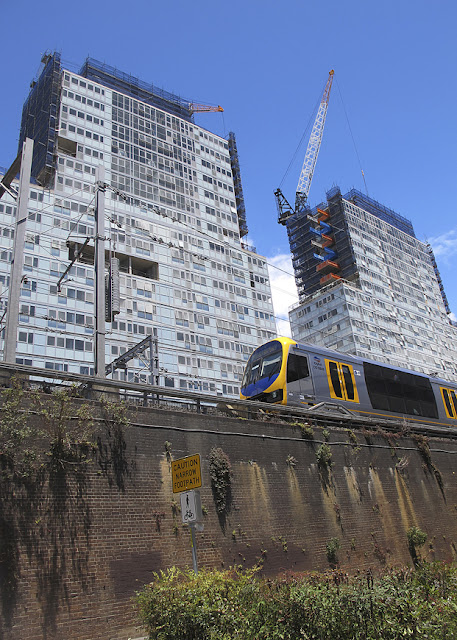 Interns pack up the kitchen. 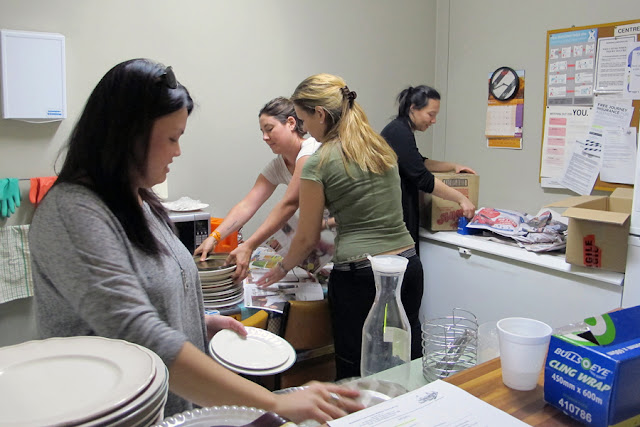 The Centre’s neighbour, the old Masonic Temple will also go. I love this preposterous building and its link to secret men’s business. 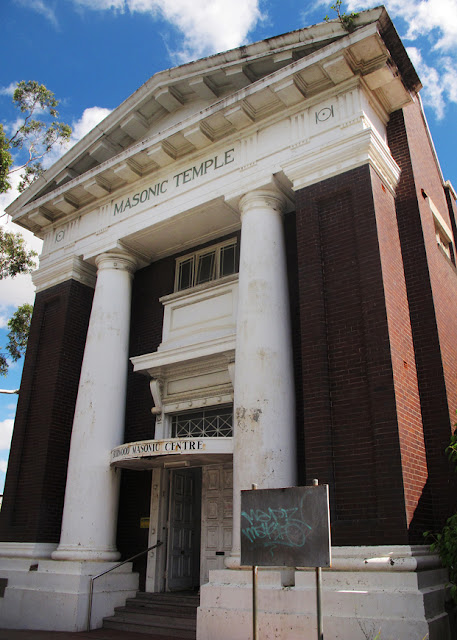 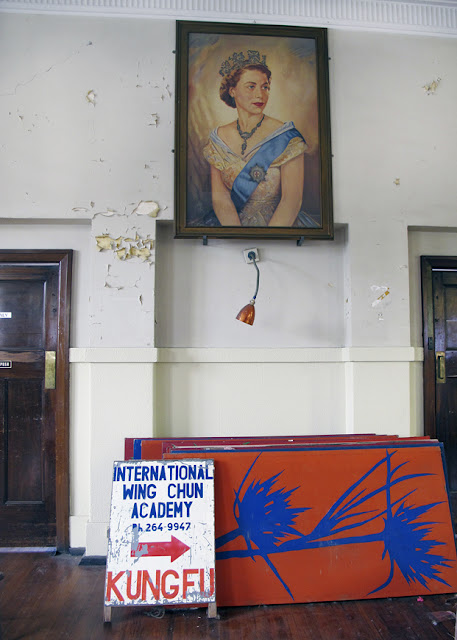