It’s the hottest day in Sydney on record. The temperature will reach a tad over 45 degrees today. I’ve decided to make the most of the sunshine and join a Captain Cook Cruise of the harbour. I can’t believe I’m doing this today. Neither can the man dressed in the Captain Cook gear. ‘Don’t mention the weather,’ he says to the tourists as cheerily as he can. He’s already suffered the digs of colleagues – reference to Cook being cooked has worn thin. 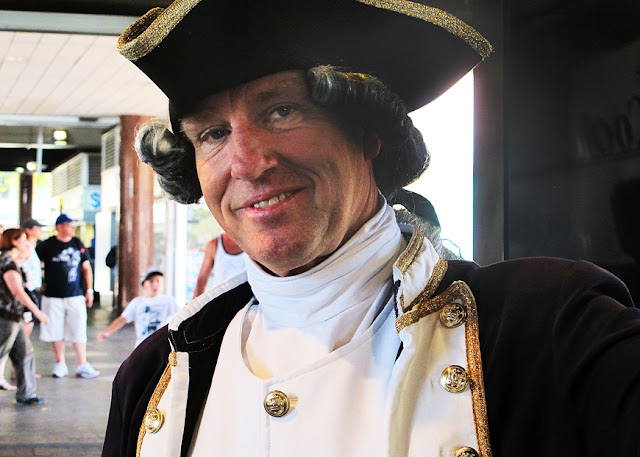 We board at Circular Quay. It’s where Australia was first settled by white people on a summer’s day on January 26, in 1788. Captain Arthur Phillip decided on this cove because of the depth of the inlet and the fresh water stream that’s now been reduced to a trickle nearby. He named the Cove Sydney, after his boss who was the British Home Secretary. According to Ruth Park, in her book Sydney, this Lord was known to his friends as a lighthearted person. His enemies called him a maggot-head. Phillip named the settlement Albion but people seemed to insist on Sydney.


I try to envisage what it might have looked like pre-settlement, when the Cadigals lived here. It was described as heavily wooded with the stream flowing through a deep gully full of ferns. Statuesque Sydney red gums, casuarinas, mimosas, turpentines, iron bark and the half tree, half grass blackboys made up the forest floor. In the gully grew orchids, cabbage tree palms and mosses. Tidal flats provided the perfect spot for fishing and the fish were abundant. The forest would have throbbed with shrill cicada song and the creaky gate squarks of cockatoos. On the point where the Opera House sits were reefs thick with oyster shells from generations of Aboriginal feasts. All of that is hard to imagine when faced with the skyscrapers that bear down on you with a slight menace from this spot on the water. 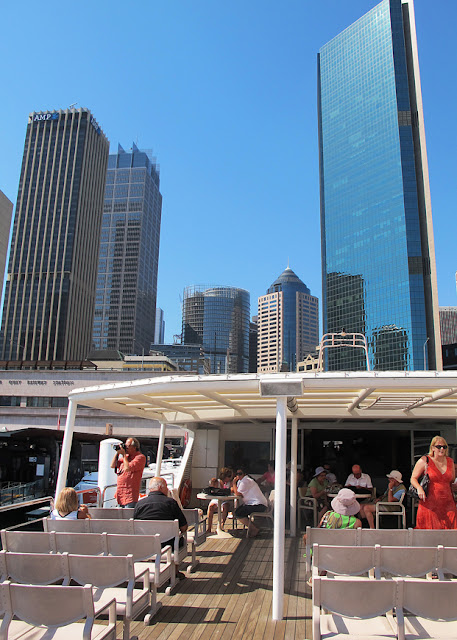 We set out and are at once flanked to the left by the Harbour Bridge and the Opera House to the right. The sun is not yet punishing, the water glitters. 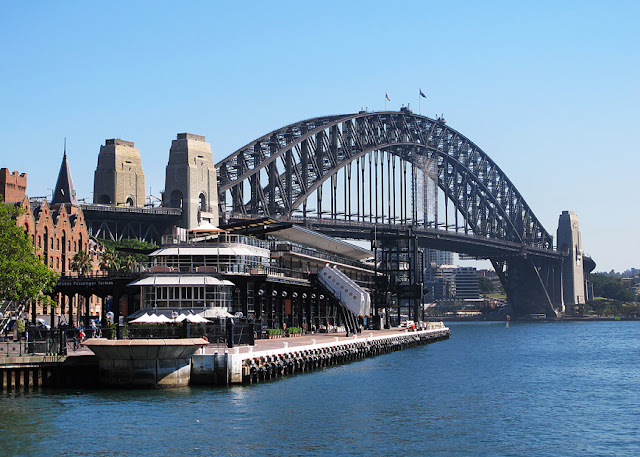 Lyn, our guide for the next two hours, introduces herself and proceeds to provide thoughtful commentary. I discover all sorts of things I never knew from her. 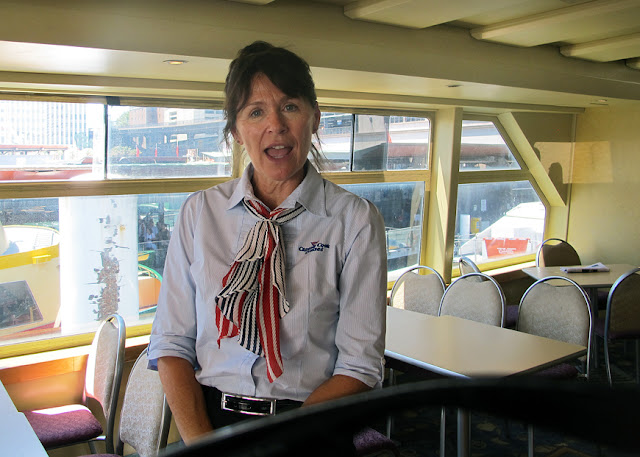 Ah, Jorn Utzon’s extraordinary Opera House. It is not quite as he’d envisaged as unfortunately he was sacked unceremoniously by conservative politicians before it was finished and the rest of the job was completed by engineers who made changes. 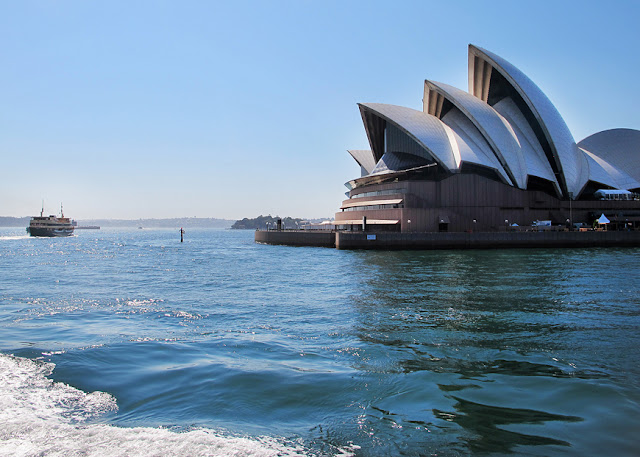 The building sits on Bennelong Point, named after the first indigenous man to befriend the whites. Bennelong was a Wangal man, from a region near the Parramatta River. Governor Phillip kidnapped him as he was under orders by King George III to establish a relationship with indigenous people and learn the language (of which there turned out to be thousands). Bennelong stayed in the settlement for six months before escaping but he sought a relationship with Phillip as a free man. He returned with Phillip to England for a time and he asked for a hut to be built for him on this point. 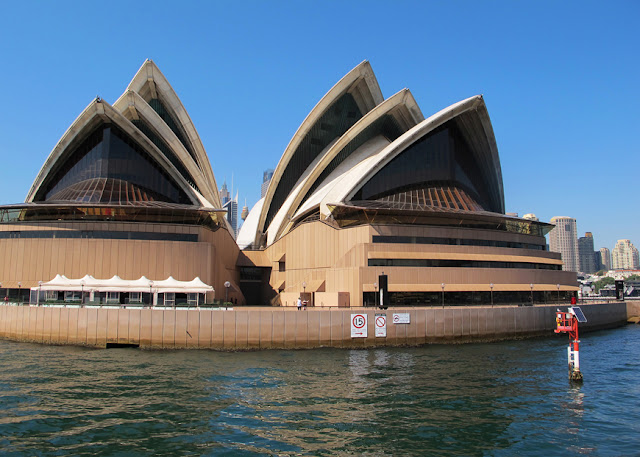 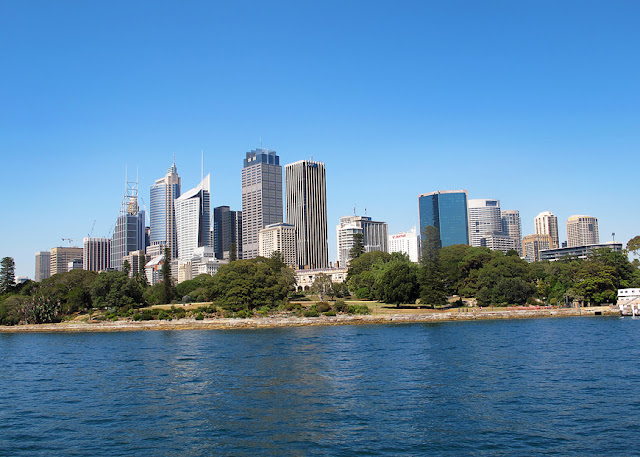 This eastern edge of the Botanical Gardens is known as Mrs Macquarie’s point. To the right is a sandstone bench, hewn for Mrs Elizabeth Macquarie, a Governor’s wife. She is said to have perched here to watch the ships from England sailing in. 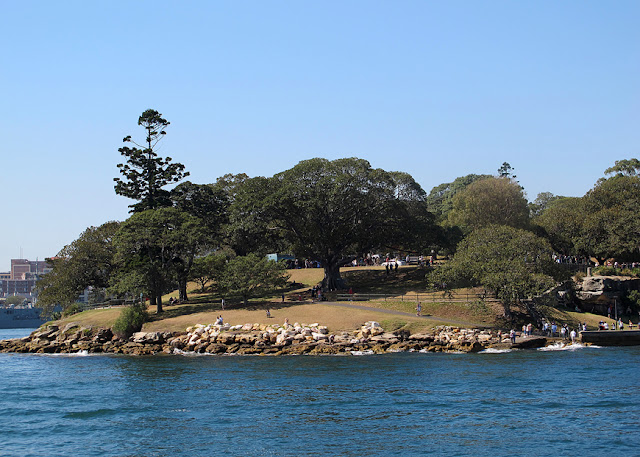 Lyn tells us Sydney Harbour boasts 66 bays and Woolloomoolo is the longest. It was the original reception for emigrants. Adjacent is the naval base on Garden Island which is where I posted The Morning After on New Year’s Day. The island has since been joined to the mainland and is used by the navy as a refit centre. Sailors from the first fleet planted a garden here. Elizabeth Bay is also named after Mrs Macquarie. The clock tower on the cream façade with the orange roof used to be the tallest building in Sydney. Roughly behind here lies Kings Cross which used to be an Aboriginal Corroboree (ceremonial dance) site. That piece of information really surprises me. So there is a parallel with white people’s re-use of the land then. 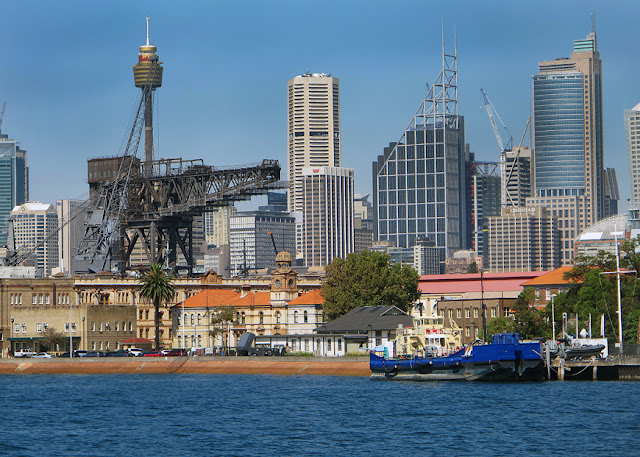 Now we come to the real estate. It’s a bone of contention for many. People from Melbourne often accuse those from Sydney of being obsessed with this topic. And what a boring topic it is. But there’s no getting away from the fact that it costs more for housing in Sydney than almost anywhere in the world. You do not get much change from three quarters of a million US dollars for a reasonably modest house. People work ridiculous hours to pay off what’s known as the golden handcuff (house mortgage). As with the rest of the western world, the gulf widens between rich and poor. Consumption in some quarters is conspicuous and resented.
Which leads us to this strange mix of east meets Art Deco called Craigend in Darling Point. Built in the 1920s, it’s one of the most expensive houses in Sydney. 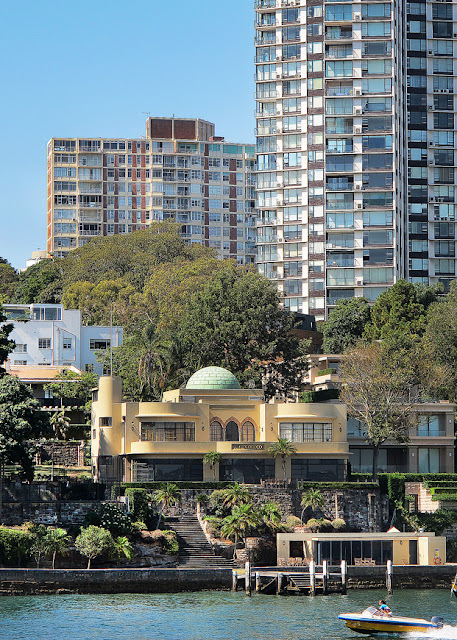 Carthona is a Gothic castellated home built in 1844. It would set you back $AUD40 million if it were on the market today but it’s been owned by the Bushells tea family since 1941. A young woman, an original inhabitant who was forced to leave it, wrote of her longing to be back here to feel the southerlies blow in across the harbour after a stifling hot day. Slick with sweat by now, I’m with her a hundred percent! 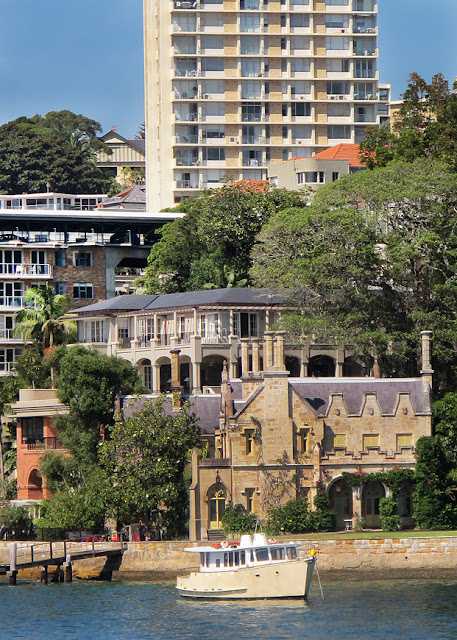 The opulence continues. There is this urge to build on every square inch of land with a view, presumably to maximise one’s investment. This is the golden rule all over Sydney – well it’s everywhere really, isn’t it? The old modest fibro beach houses with their big gardens have been bulldozed to make way for large, blockish buildings. These hem the streets in, affording people no hint of the water views that lie beyond. 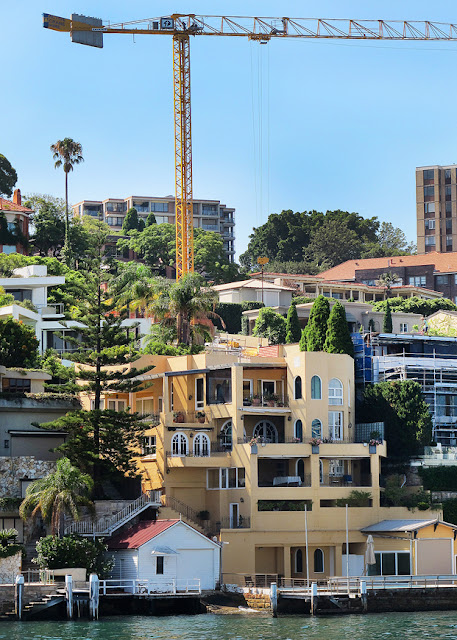 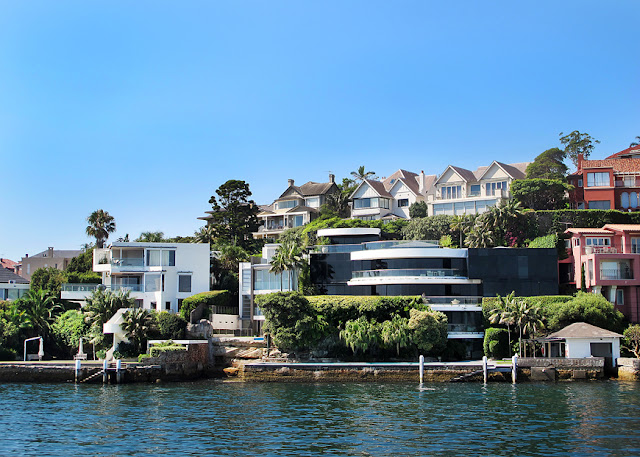 We're told that Altona in Point Piper hosted Hugh Jackman while he was in Sydney filming Baz Luhrmann’s Australia. 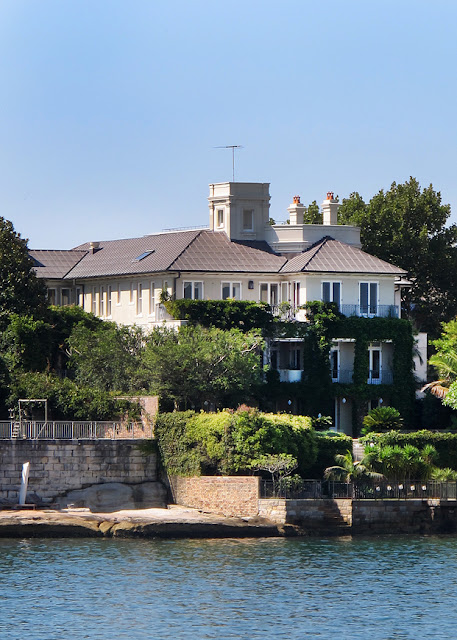 A seaplane takes off from the beautiful Rose Bay. 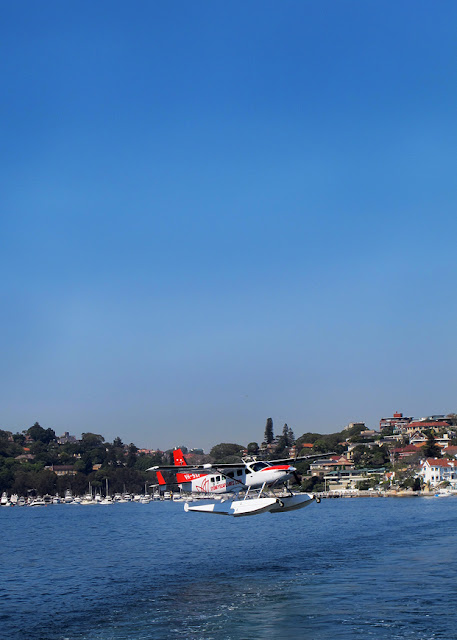 The water looks very clear and there are lots people out fishing today. According to Lyn, the harbour has been cleaned up and now contains over 580 species of fish. It is classified as a marine park all the way to Manly. 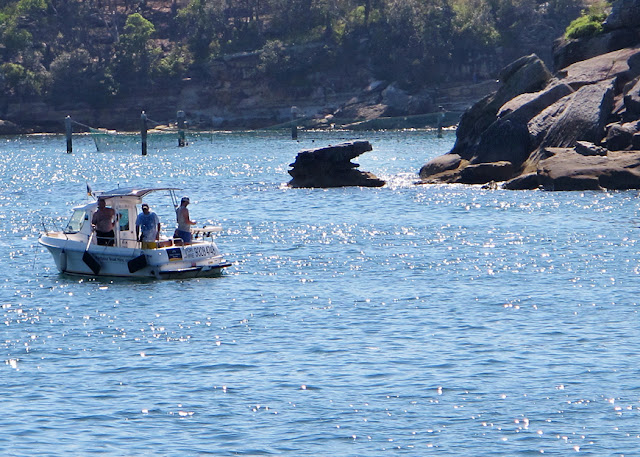 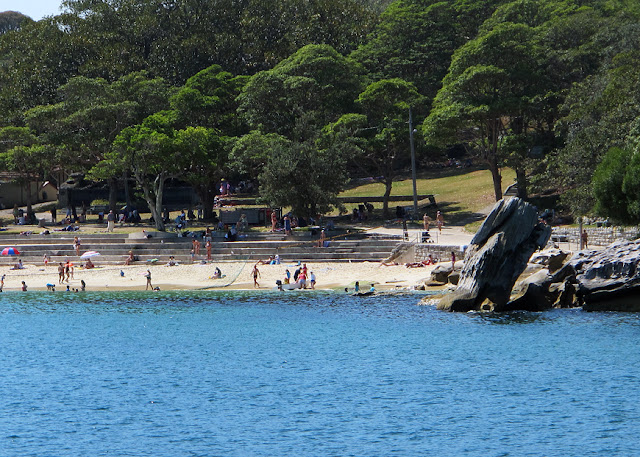 The very beautiful Neilson Park Reserve lies behind the dispiritingly named Shark Beach. And yes, says Lyn, Sydney Harbour is full of sharks. The most recent attack occurred two years ago, when a navy diver lost part of his leg and his left hand to a bull shark in the harbour between Garden Island and Woolloomooloo. The number of attacks is surprisingly few but there are plenty stories about near misses. Surfers often tell of being shadowed right into shore – no room for error there. The primal horror of it looms in many people’s minds when they take to the water – and that includes me. 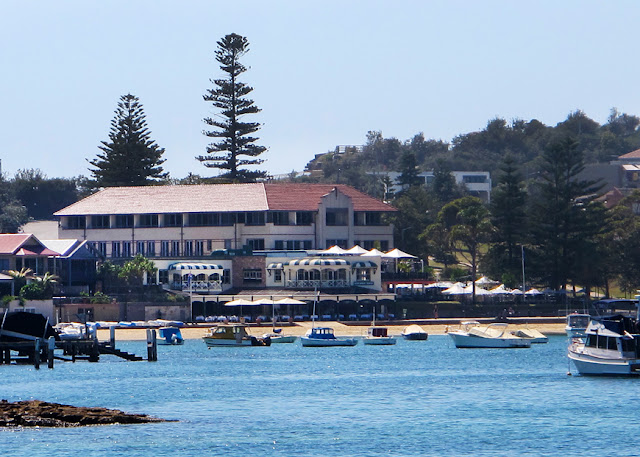 Here is Lady Jane Beach, one of three nudist beaches on the harbour. The other two, Cobblers and Obelisk beaches are on the Middle Head side. According to Lyn, these three beaches are on navy land because some bright spark in the 1970s figured that in order to be arrested for nude bathing, state, federal, and Navy police would have to be involved. This was way too difficult, so nude bathers were left alone. The quirk in the law must produce some interesting views for people in the navy. 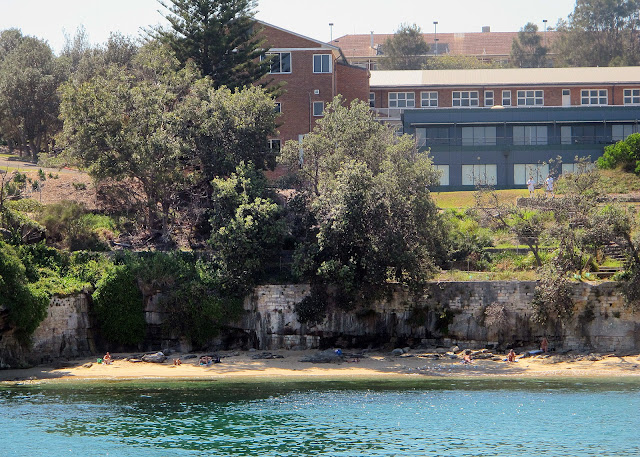 This is where we had our last view of Wild Oats sweeping out towards the Tasman Sea at the start of the Sydney to Hobart Yacht race. The headland beyond is The Gap, where countless people have committed suicide. For many years a man who lived nearby would monitor the cliff top, then go out and offer those people a cup of tea and a ready ear. His kindness saved thousands of lives.
﻿ 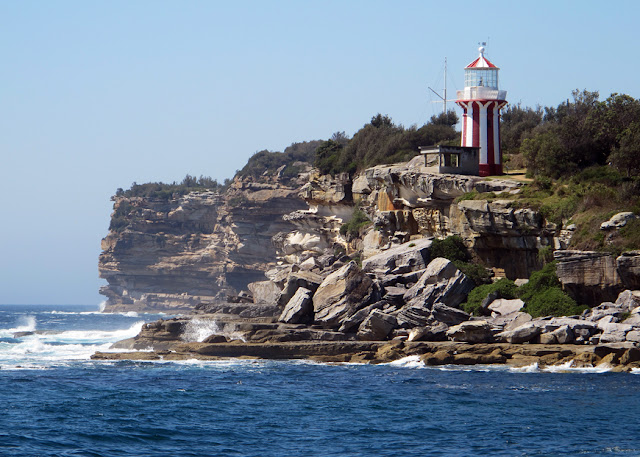 The boat moves a little past the head on its turn to the north, and instantly it feels like we’re properly at sea. 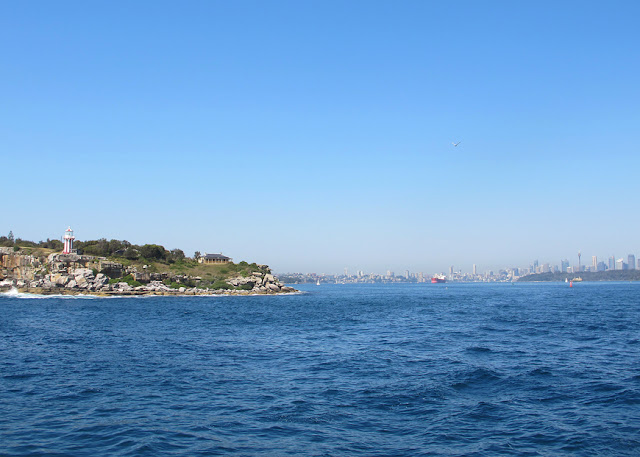