If you’re in the mood for raking over trash, treasure, kitsch, antiques or collectables, Rozelle Markets is the place to go. Even if second hand markets aren’t your scene, there’s always a band, a smallish but tasty selection of street food and plenty of people watching to be had. 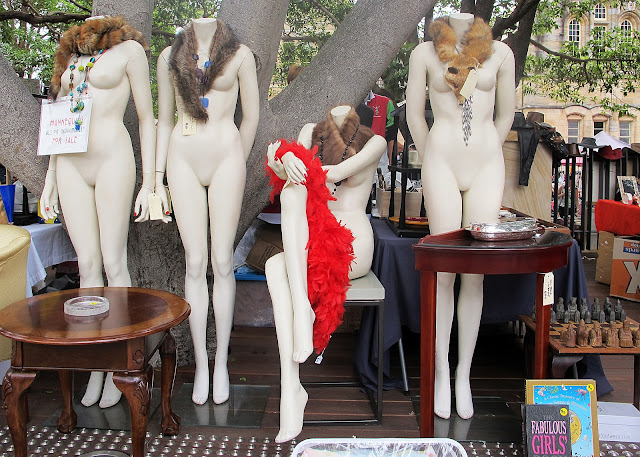 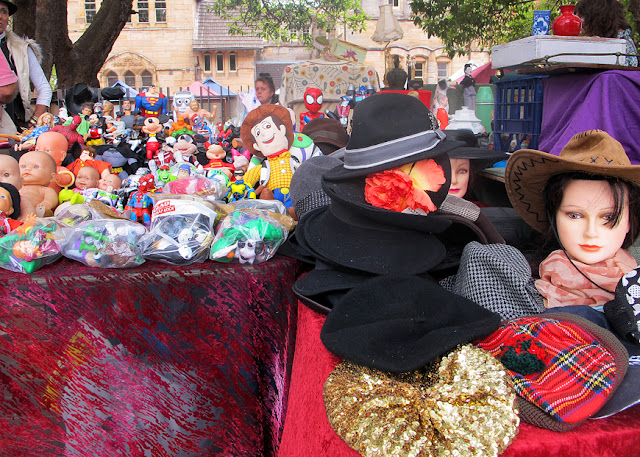 Jan has decided to buy this sign from Zoltan who is minding the stall for his artist girlfriend Tanya. She discovers that Zoltan, like her husband is Hungarian and the same age too. They get into a conversation and it seems both men might have a fair bit in common. Jan tells me she meets Hungarians all the time. Only yesterday she went to get the post and a man made a comment. They ended up talking for a couple of hours – he was Hungarian, of course. She goes home to her husband and tells him she’s met yet another one. Zoltan reels off the list of well-known Hungarians for us: Paul Newman, Paul Simon, Jerry Seinfeld – I had no idea. I have to come back past his stall so Zoltan says he'll tell me about the time he met Roman Polanski. 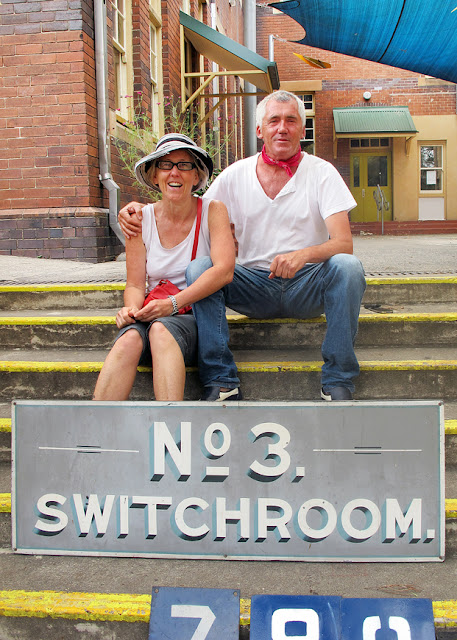 This stall is full of old treasures Tanya’s sourced from all over the country. She was in Broken Hill when she noticed some people about to chuck out these old bowling club numbers. In exchange she bought them a case of beer and they were pleased to be saved a trip to the tip. Tanya’s turned a lot of them into art works. To see them, go to: www.tanyastubbles.com.au 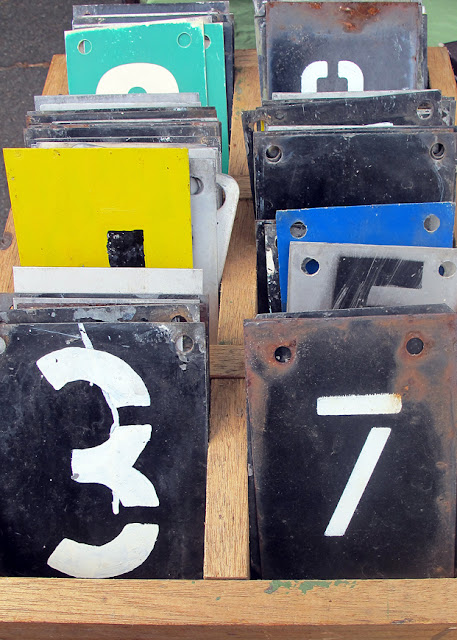 Tania (not the stall holder) is today's singer. 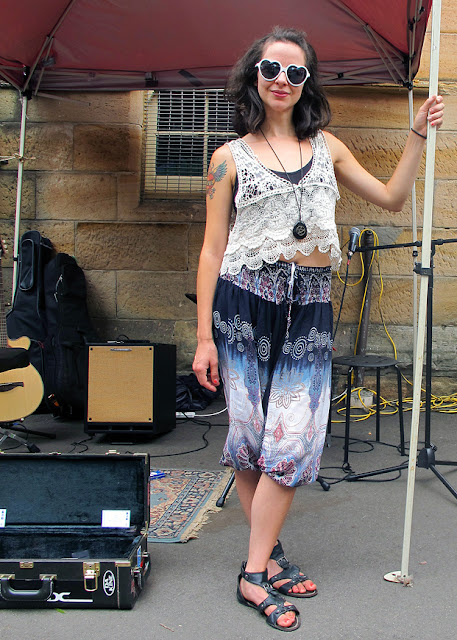 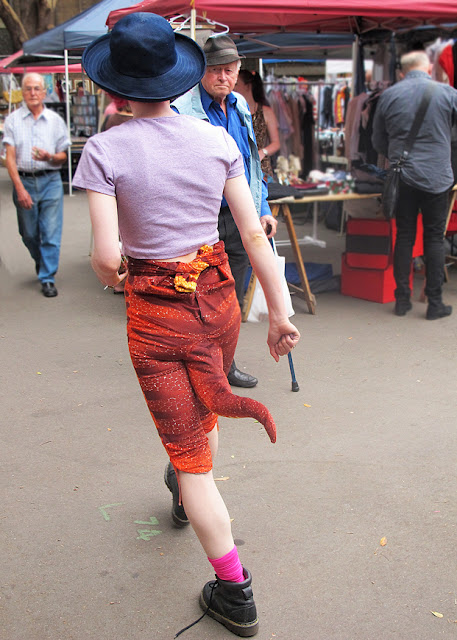 I’m laughing with Julie about the Monkees TV show inspired by the cover of this old album. They were the fake band pretending to be like the Beatles but then they turned into a real band that at one stage outsold the Beatles. Who was it who died recently –Davy or Micky? Davy, we decide. 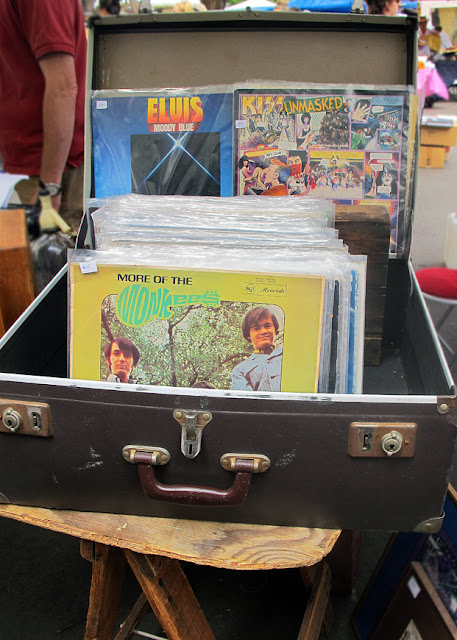 The topic shifts to the Partridge family and we confess to having had mutual crushes on David Cassidy. ‘He was going to be mine, I was sure’, says Julie. I hum ‘This Morning, I Woke up with a Feeling’ – ah yes, a favourite.  Julie confides further:  ‘You know I Googled him recently. He’s not aged well; must be in his sixties.’ There’s a hushed silence as we both contemplate this extraordinary fact. 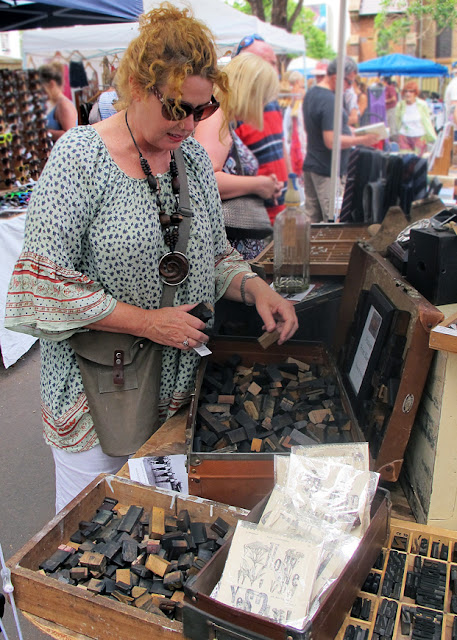 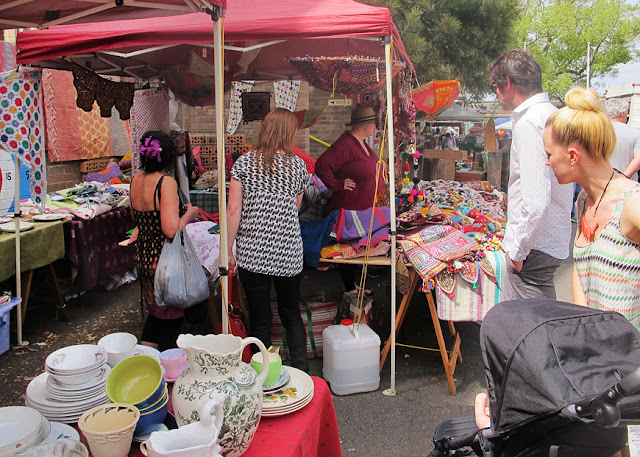 There's a rush on at Fleur's fabric stall, and no wonder. 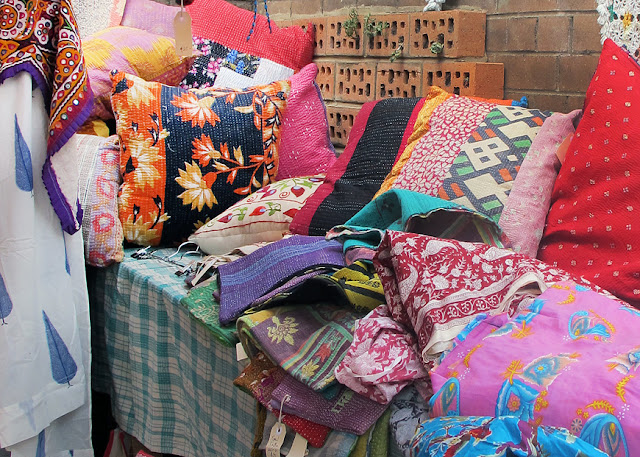 The Ali sisters have come together to sell their second hand clothes. It’s their first time at the markets and already a good experience. 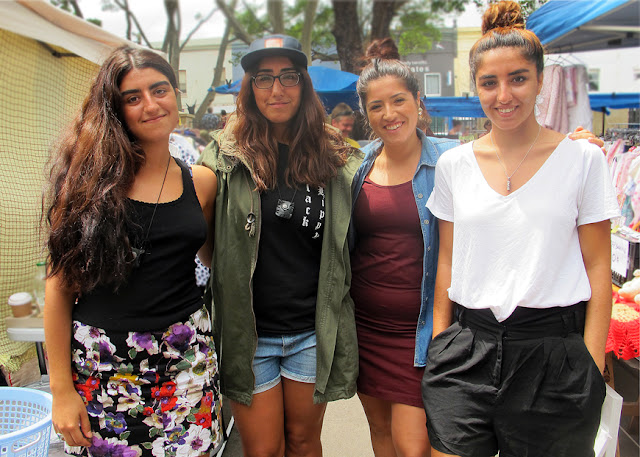 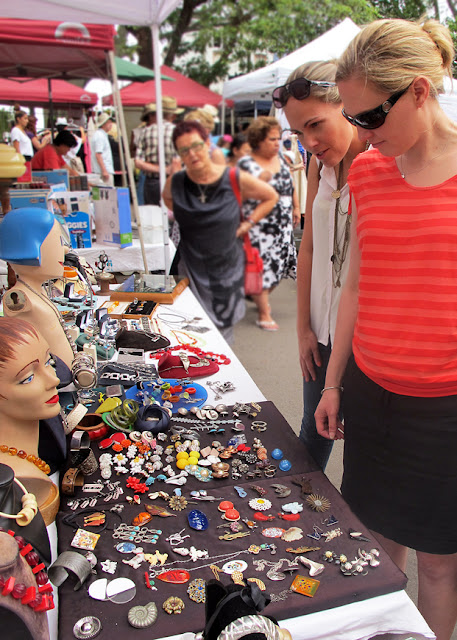 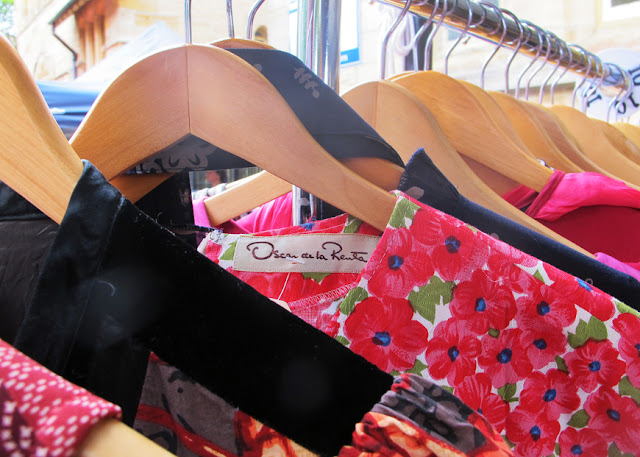 The coffee maker reckons he was a stand in for Burt Lancaster. His yellow sign reads: Behind every man is a strong pot of coffee. 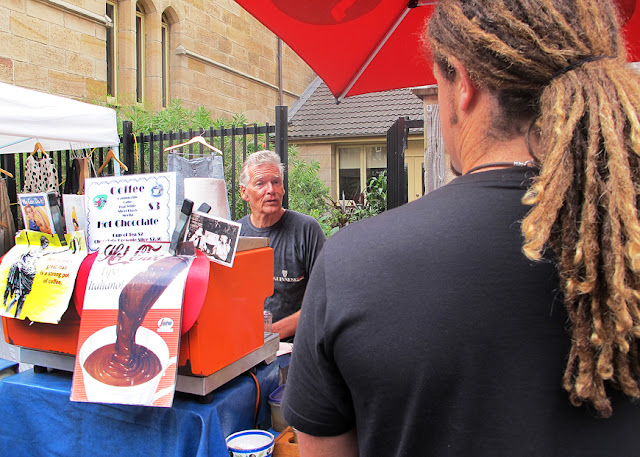 And yes, it works. 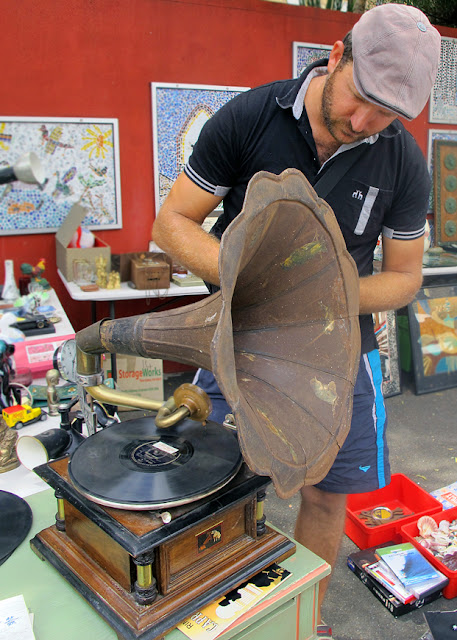 Zoltan had always been taught that in Australia if you go to a pub, you never push in front of someone to get a beer – this is very uncool. Well he’s done it twice. The first time when he was twenty and in the tough mining town of Kalgoolie. He didn’t do it on purpose but he slightly pushed a man at the bar who glared at him and said: “If you ever do that again, I’ll f…. shoot you, you…….’. The man proceeded to eye ball him for half an hour. Zoltan thought he might get killed so got the hell out.
The second time was at a swanky hotel in Berlin. He was in the city to produce a theatre show and the Berlin Festival was on. George Clooney was in town and his female colleagues wanted to hunt him down at the main hotel where the action was. So he was at the bar of this hotel and again, quite by accident, he pushed ahead of someone. Zoltan turned around to apologise to a man who turned out to be one Roman Polanski, his namesake of sorts. You see, all his life, Zoltan has told people his difficult to pronounce surname is Koteczky, as in Polanski. Naturally he told Roman, they started talking and Roman invited him to a private party to celebrate the first screening of The Piano.

Needless to say, Zoltan had a pretty wild night. When he left around 4am, a bit worse for wear, he told Roman if ever he had another son, he’d call him Roman. Well four years later, his then woman gave birth to a boy and now he has a son called Roman. 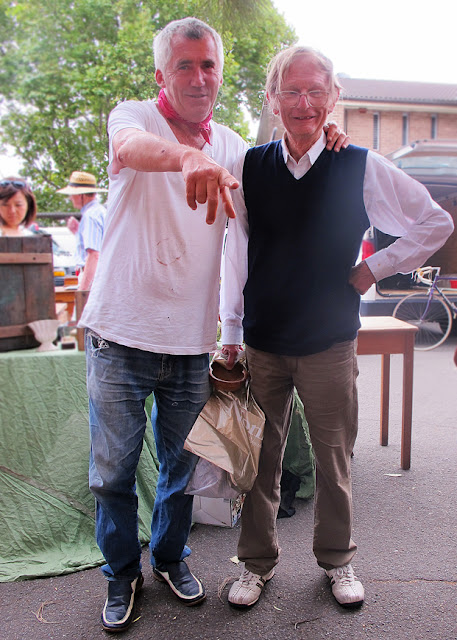 Zoltan with Cyril, who's been trying to bargain him down on some eggs but Zoltan isn't budging. 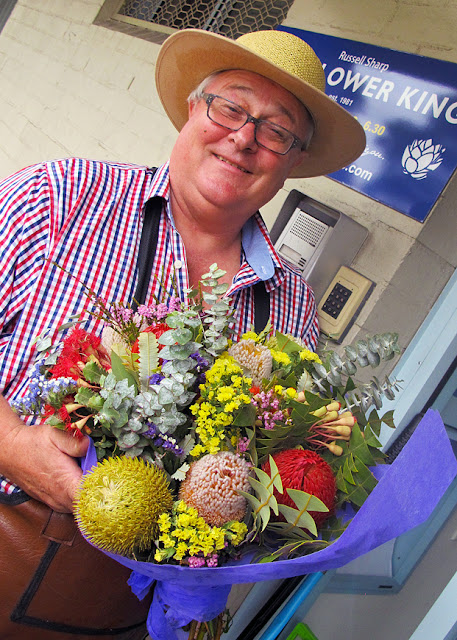 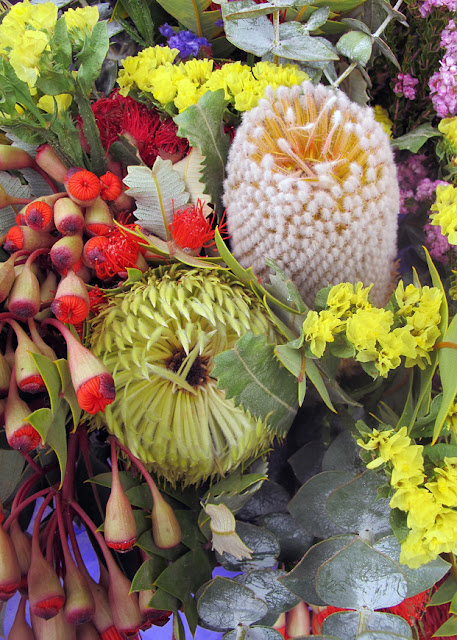