Australia versus Sri Lanka at the SCG, PART 1

What makes someone wake up on an average Sunday morning and decide they’d prefer to step out as a Rubik’s Cube, rather than a duck, or a cockroach or a Weet-Bix? Reason I ask is that last Sunday many people all across Sydney and beyond grappled with this very question. The occasion of course was the one day cricket match featuring Australia and Sri Lanka at the Sydney Cricket Ground. I have to confess to knowing nothing about cricket, but with Pete and trusty guides Roger and Johnno, I’m taken to my first ever match!

We arrive at the car park and notice a number of people struggling into their costumes. I rush over to this family to ask them if the green squarish figure (known otherwise as Tim) is a Tic Tac? ‘No, he’s supposed to be Gumby’, they say in unison. I draw a blank. ‘Haven’t you heard of Gumby?’ they ask, looking amazed.  Well no, Gumby’s completely passed me by. 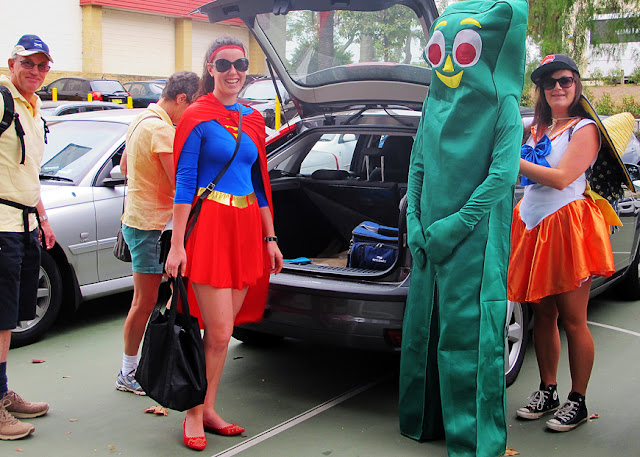 These friends are from the Hills district. I can tell already the two dollar shops across Sydney have been making a killing, particularly with their afros, as there’s going to be a lot of Malinga look-alikes out here today. 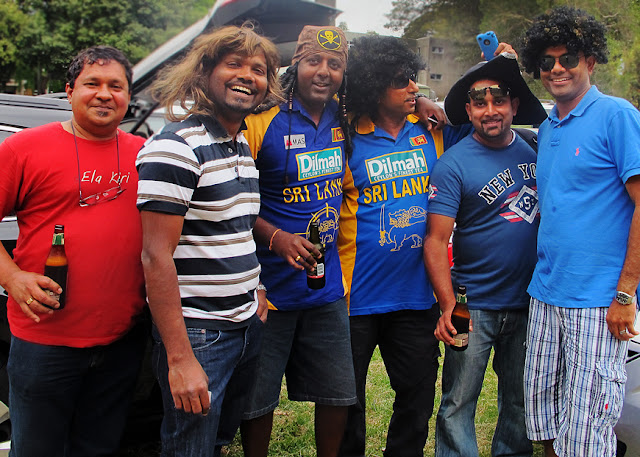 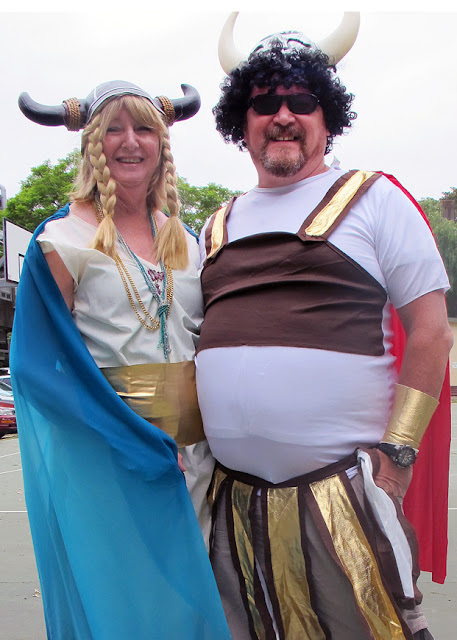 The afro is given a good Nordic treatment here. Jenny and Jern have come all the way from Windsor. They look around a bit nervously as not many people appear to be in costume. Don't worry guys, you won't be lonely for long. 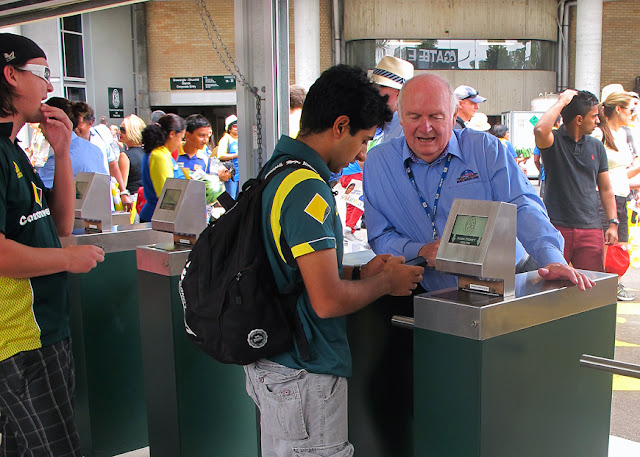 A group of friends who seem to have mixed allegiances. 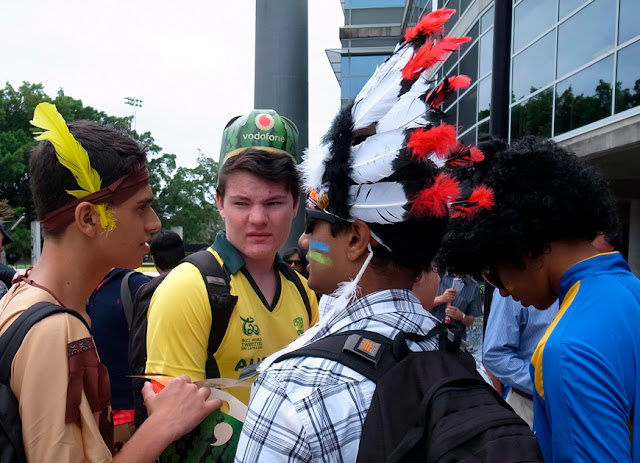 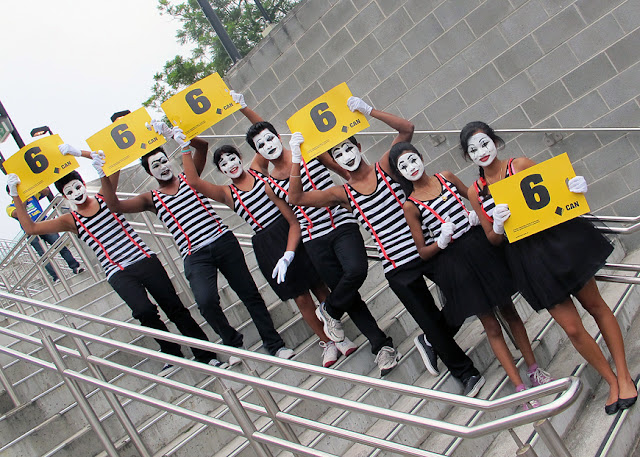 Kumar from the Blue Mountains has lost his way. 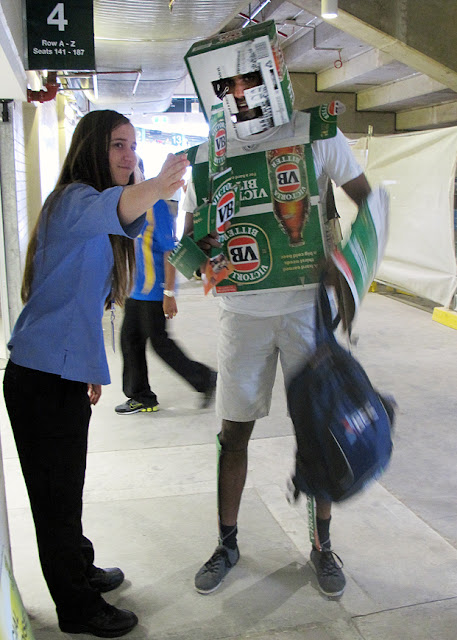 In response to my question about which team he's backing, Kumar says he's going for the beer. 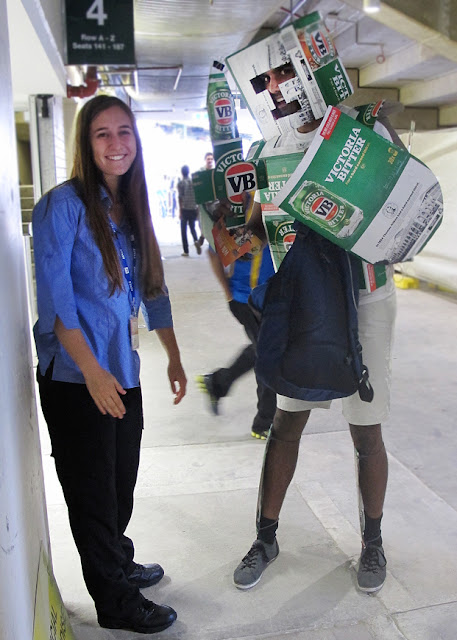 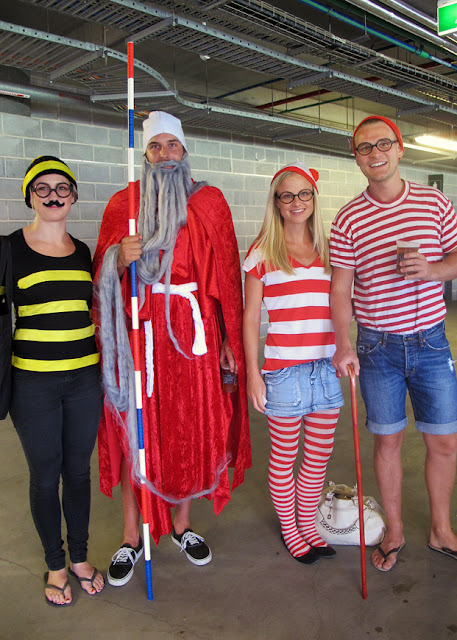 And the game is just about to start. 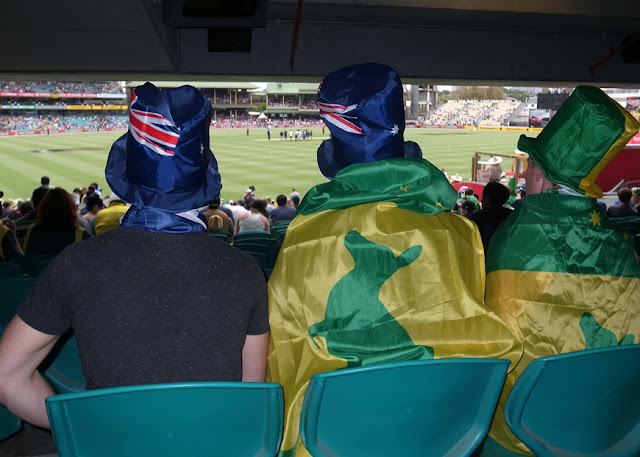 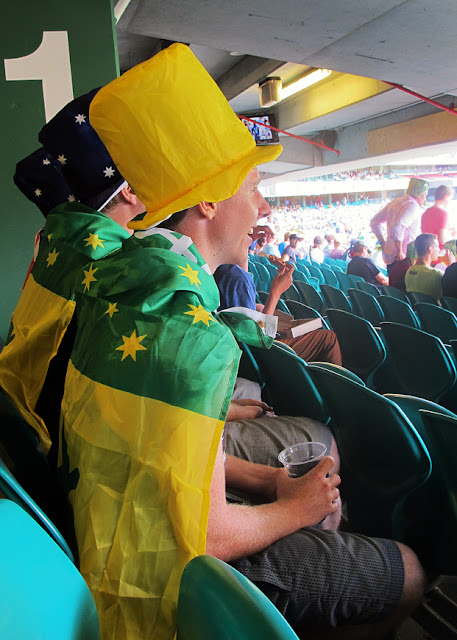 On my way to my seat I meet these guys from Newcastle and get my first hug from a bloke in a fat suit. 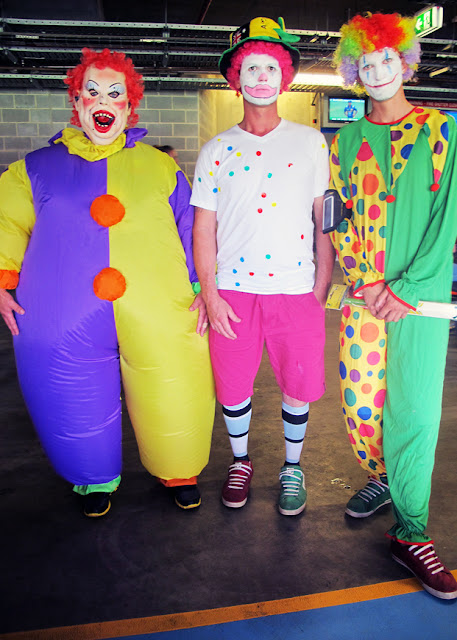 Mother and son. Mary is from - wait for it....the Blue Mountains. Is there something in the water up there or what? Her son Glenn hails from Baulkham Hills. 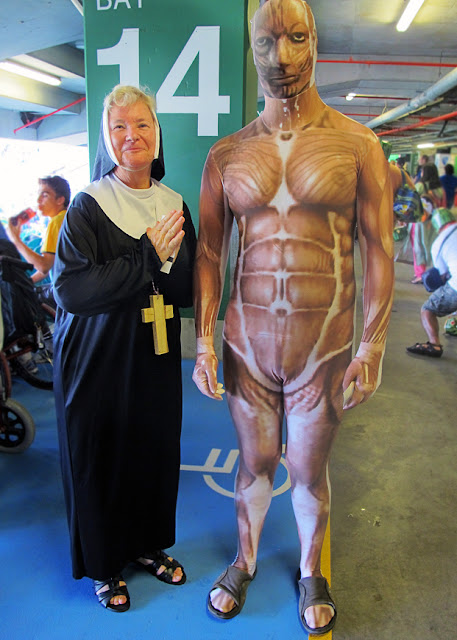 A saucy man from Freshwater. The Four and Twenty pies add just the right touch. 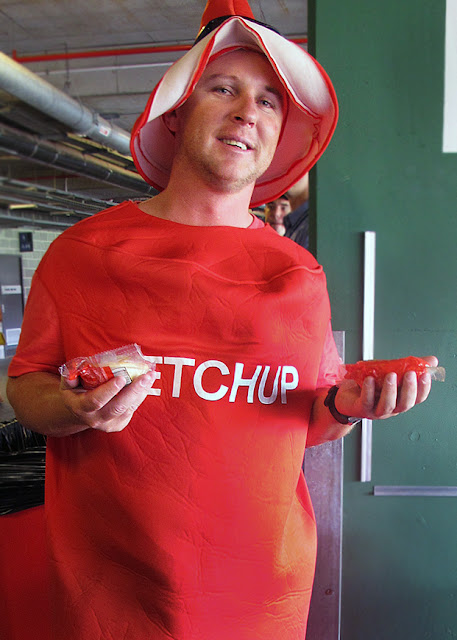 Are we talking Merv Hughes and Dennis Lillee here? They're part of the entertainment and tell me they're from the Firecrackers Live Street Theatre and Performance Co. They hang somewhere near a park bench in Martin Place. 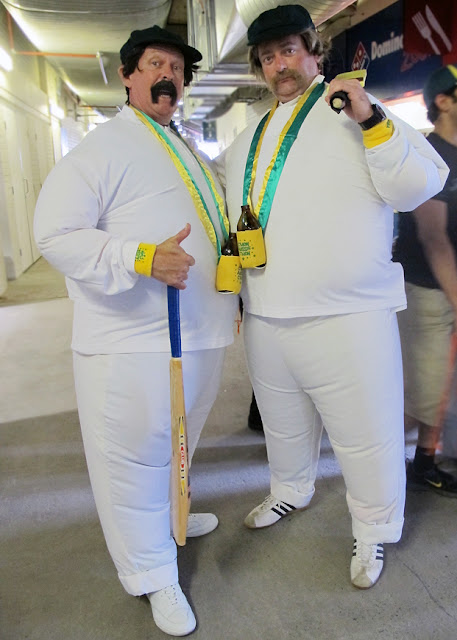 The Sri Lankans don't go in for costumes as much as the Aussies (although there's a ripper coming up in part 2). But they more than make up for this with their music, dancing, and the vibrant energy that's pumping from their stand above us almost continuously. Who would have thought to bring their own brass band? Sandwiches, tick, sunscreen tick, saxaphone tick! 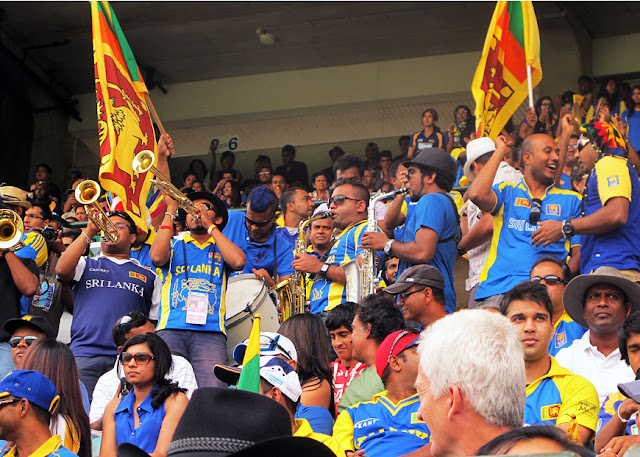 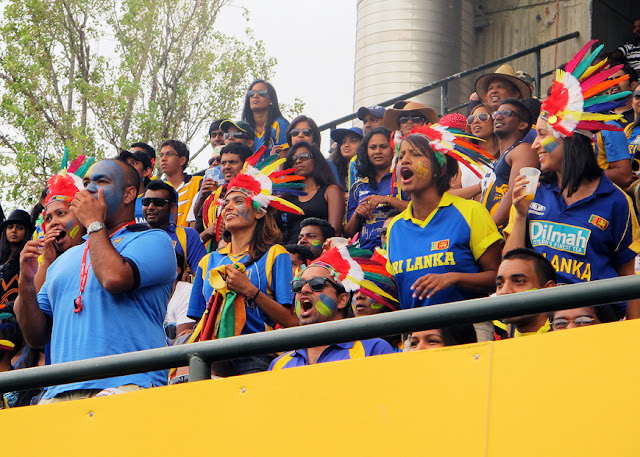 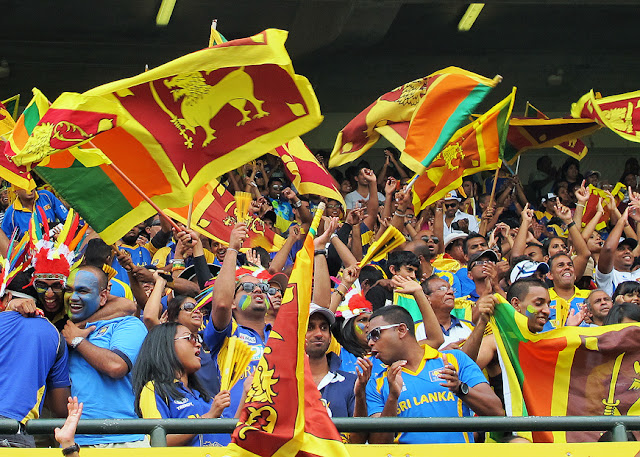 They get a lot of attention from many quarters. 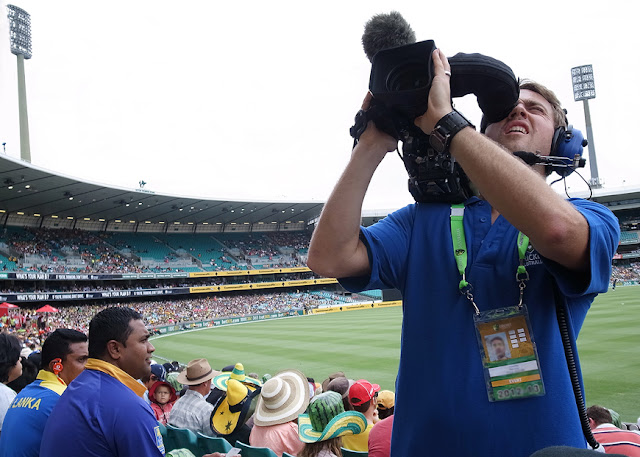 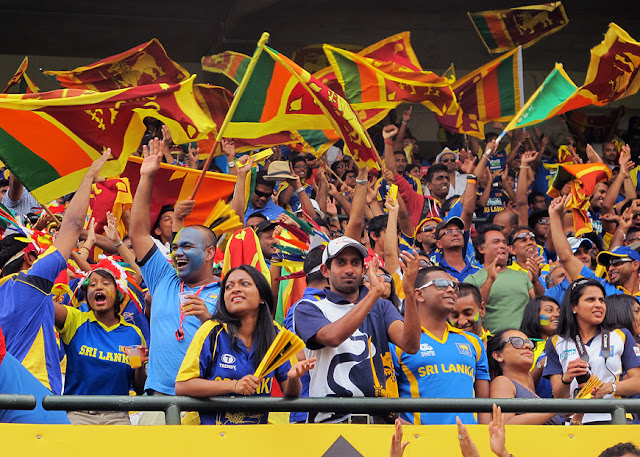 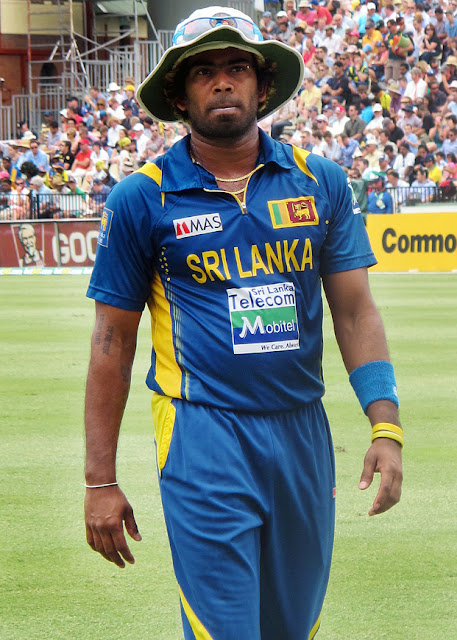 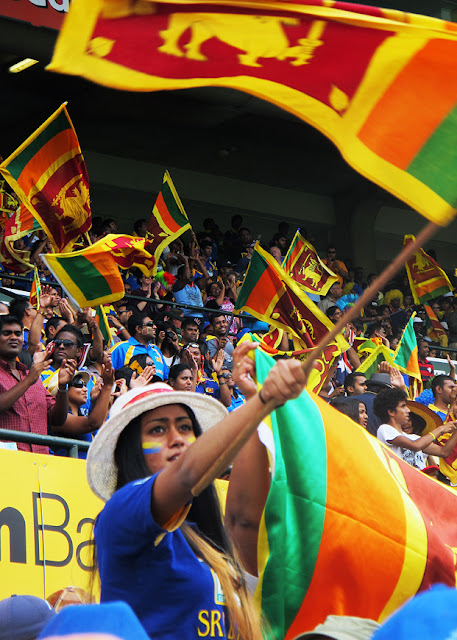 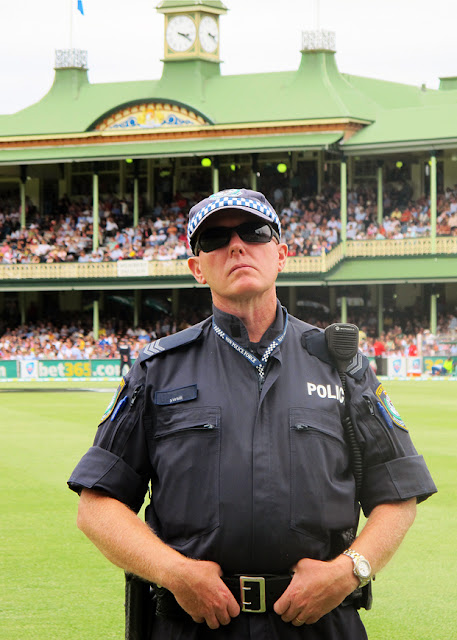 Back down with the more sedate Aussies, we say hello to our neighbours. 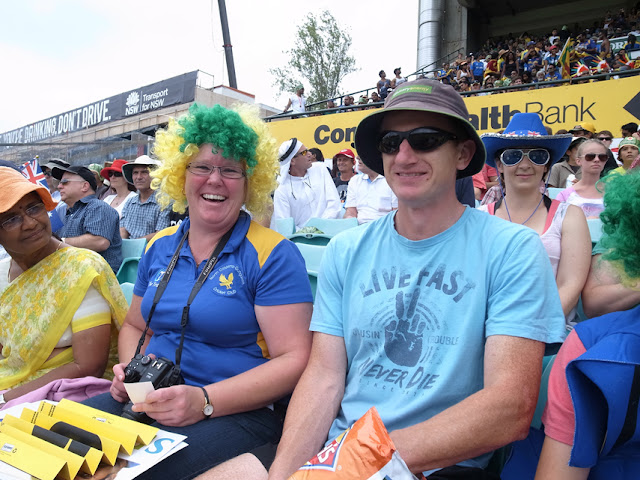 This is Anew with his kids Eum and Anam. 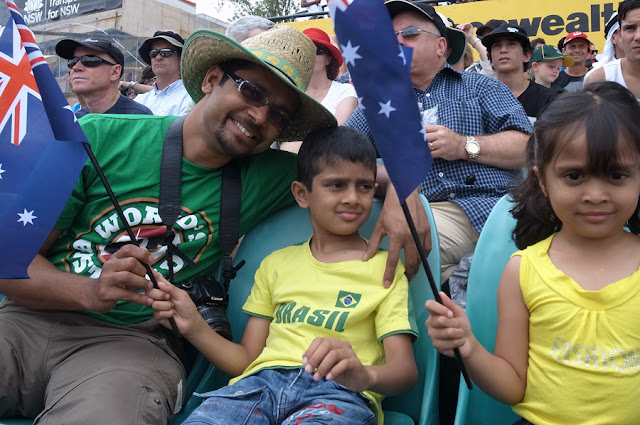 Here's Chris and Natasha who confess to being all round sports tragics. They were bopping merrily to the Sri Lankan band behind them. 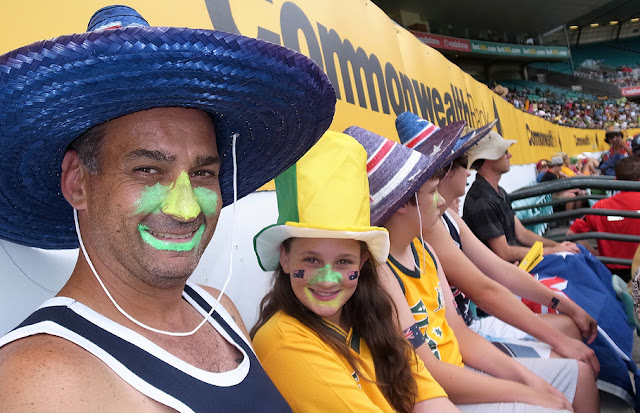 I go out for a wander and come across Hugh Hefner with his delectable bunnies. In reality they're barmy army from Blighty but they currently reside all over Sydney from Bondi, Darlinghurst, Maroubra to Cammeray. 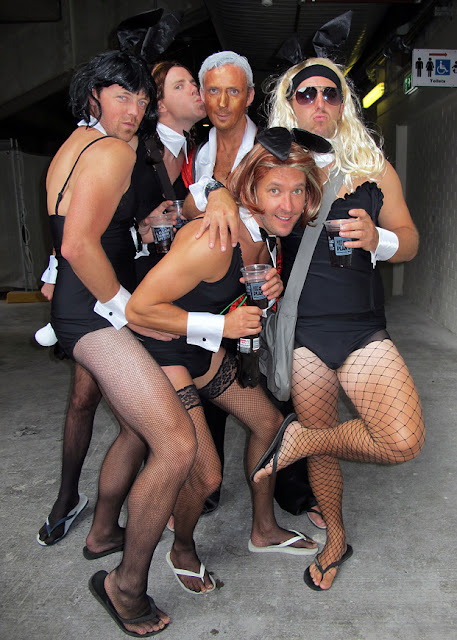 A Sri Lankan supporter points out a rather unsightly stain on the all in one suit but the man in blue is begging for a drink. 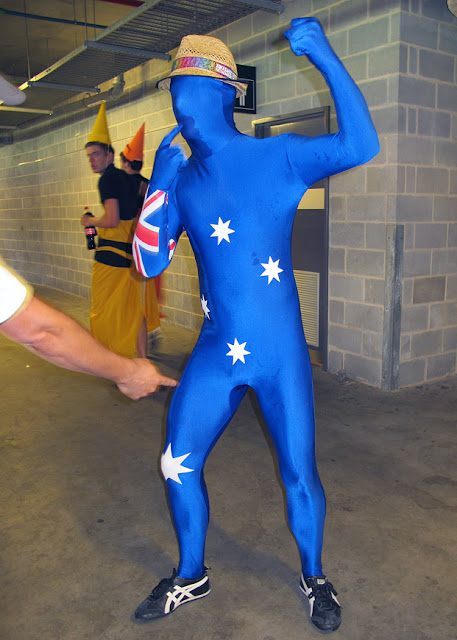 Ah, now here's a fine example of one country helping out another in need. 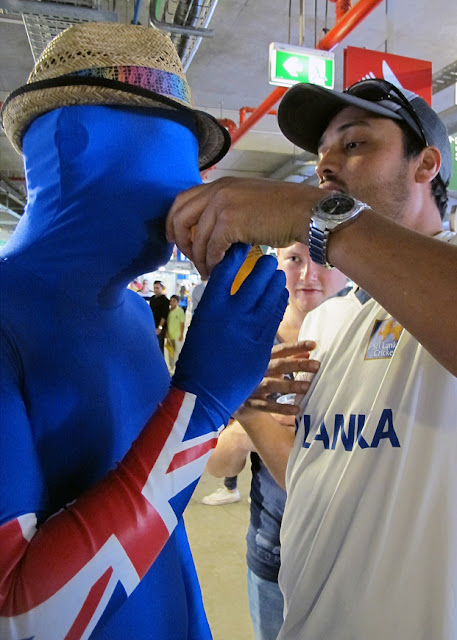 That's all for now but stay tuned for another post shortly.
Posted by Unknown at 02:17