Each Wednesday, a group of old friends get together over coffee and cake and shoot the breeze. They call themselves the old bastards and I've been invited to join them. Today's gathering is at Leif's in Arcadia.

This place is well named as it's like a pastoral retreat. Just 42 kilometres north west of Sydney, Arcadia is a semi rural suburb with just one cafe come general store that locals call the Arab outpost. In the window of the Arab outpost today someone has posted a notice offering free roosters and there's a page about an Equine Bowen therapy business, alerting horse owners to 'gaiting' problems.

Here and in neighbouring suburbs of Glenorie and Dural, fruit and flowers are grown commercially: peaches, figs, strawberries, roses (David Austins do well in this region) and birds of paradise. After recent downpours, the pastures look lush. 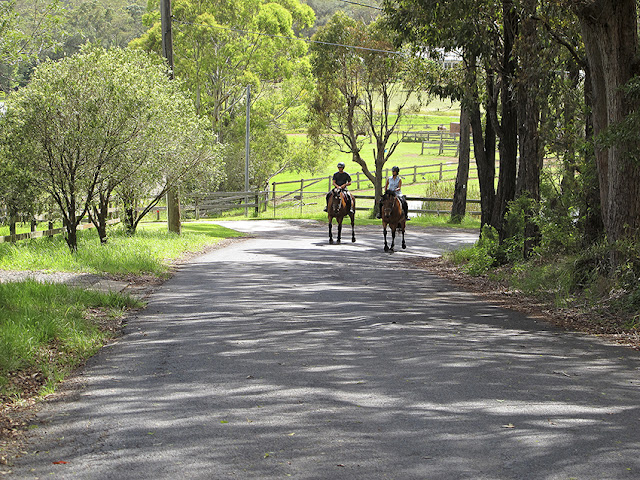 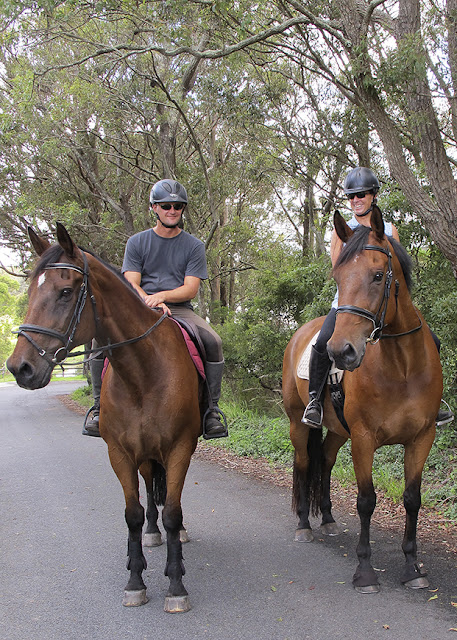 The woman tells me these horses are brothers and like brothers, they're close but they can be a bit snippy. Today they're feeling snippy. 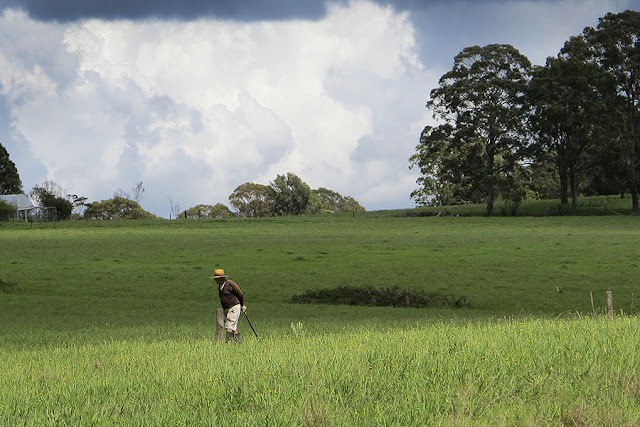 The area has a Benedictine monastery and a few cows are run on the surrounding land. This monk looks after them. 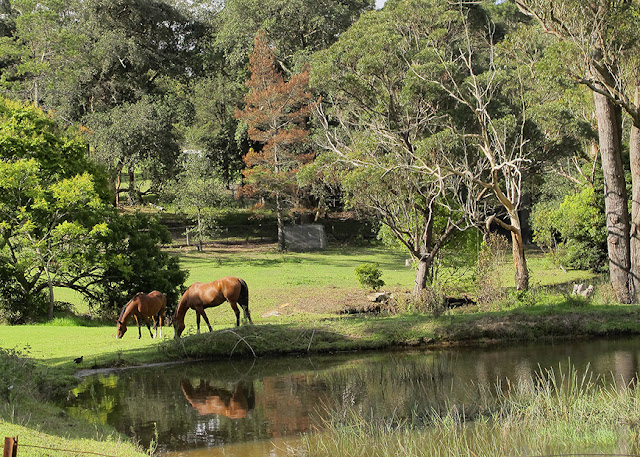 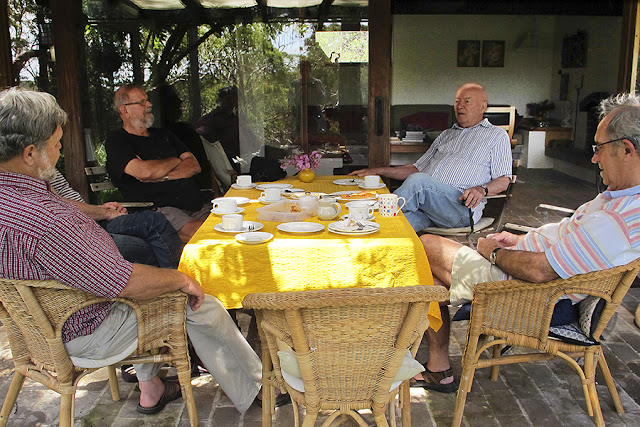 The old bastards originally hailed from all over. Clockwise from left is James (Aussie with Aboriginal ancestry), Albert (Dutch), Leif (Danish) and Jim (English) and Ulric (Swiss) is on the far right in the image below.

They're talking about the second world war and strafing when I arrive. They discuss the experiences of various people they knew and their own.

Leif was a young boy when Germans occupied his native Denmark during this war. He says he only spoke once to a German soldier during these years. One day a soldier asked him if he could buy fish from him. The soldier was being sent to the front where he knew he would almost certainly be killed. Although he'd been posted in Leif's fishing village for some time, he'd yet to eat fresh fish.

The soldier and Leif walked a long way to the fjord to find Leif's well box, a box with a hole in that kept the fish alive. When they arrived Leif discovered someone had stolen his fish and there was just one left. The German soldier realised the boy had been robbed but still insisted on buying the one fish, although he was meant to buy six. He gave Leif the money for six fish and saw the boy had no change. He left it at that, ruffled the boy's hair and they parted with auf wiedersehen. 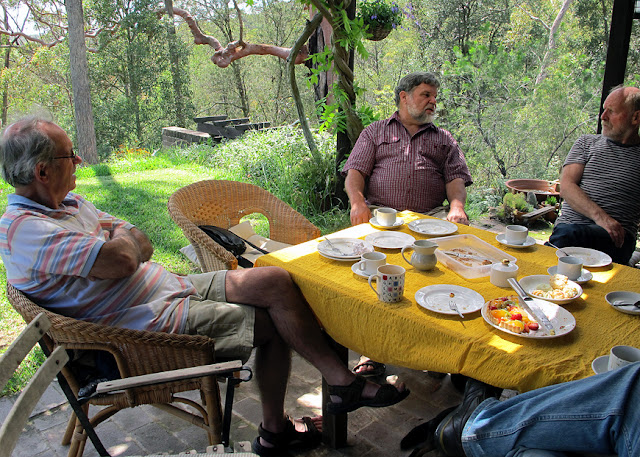 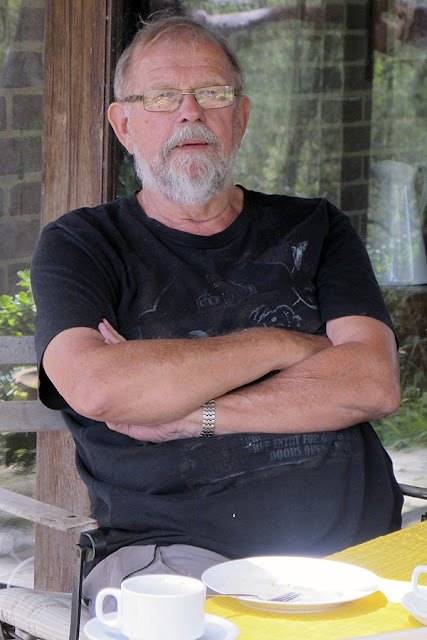 The subject matter moves on to snakes. They talk about the value of having a python on your land because it deters other snakes and rats. It's said that possums hate the smell of old dog, so if you want to get rid of a possum living in your roof, leave an old dog blanket in there - I'll remember that. 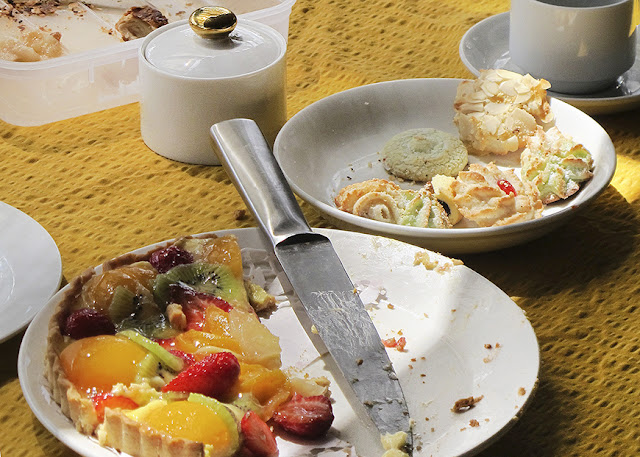 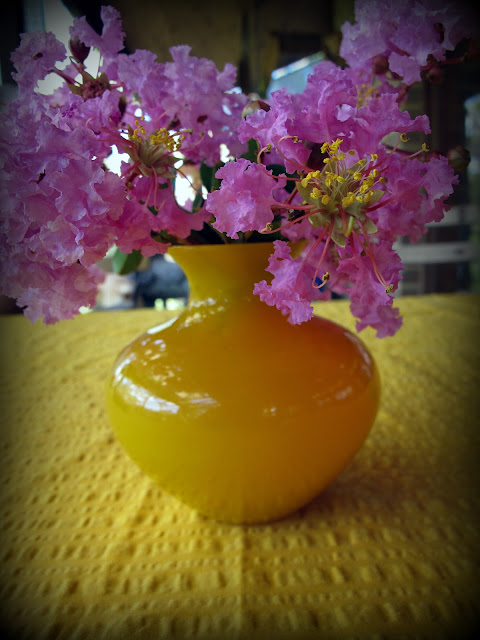 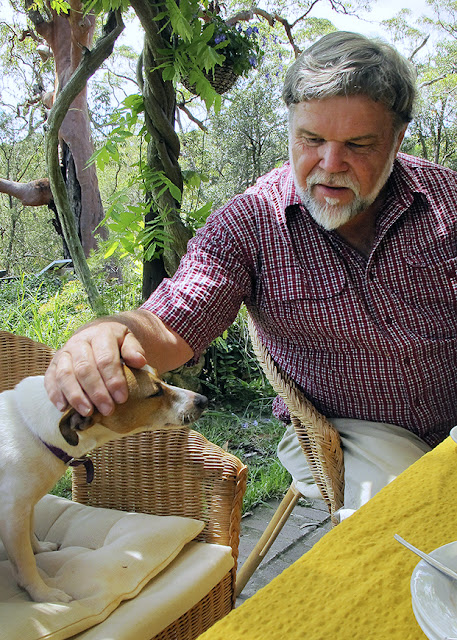 Their dogs wait patiently for scraps. 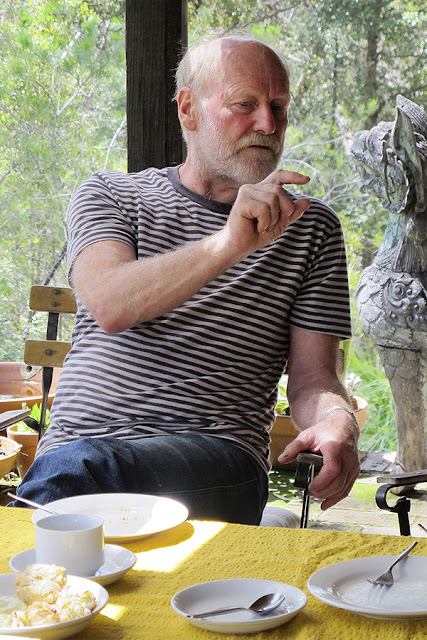 Later, I'll join Ulric at his home and studio nearby to hear his story which I'll post shortly. They're finishing up so I wander through Leif and his wife Christine's garden. 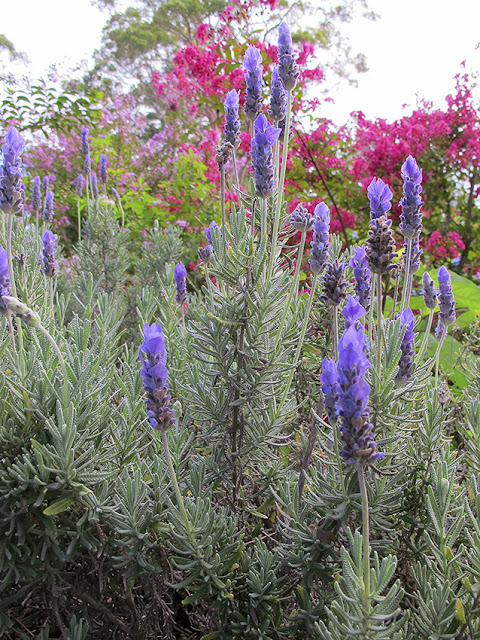 The lavender, crepe myrtle and plumbago are flowering brilliantly. 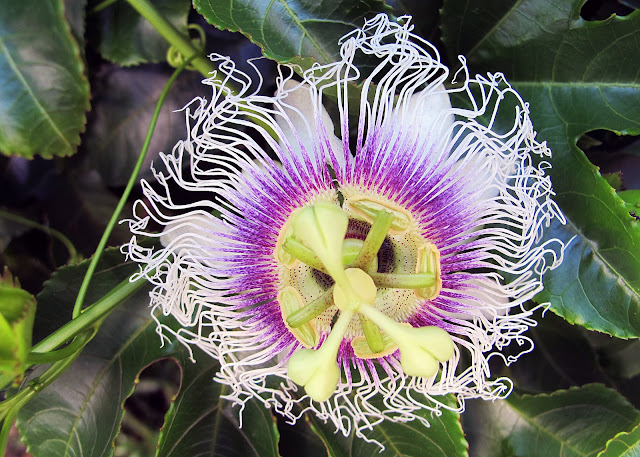 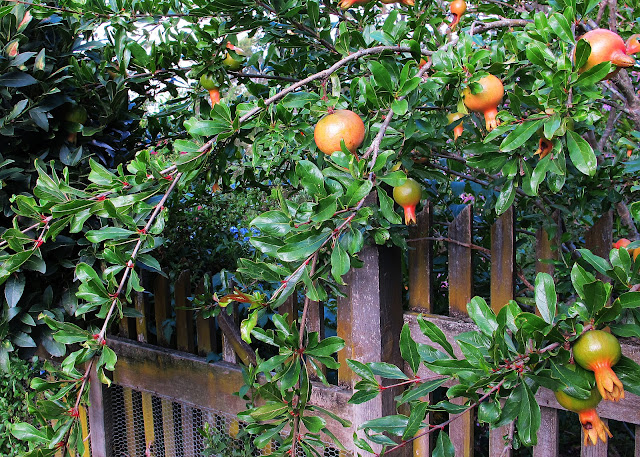 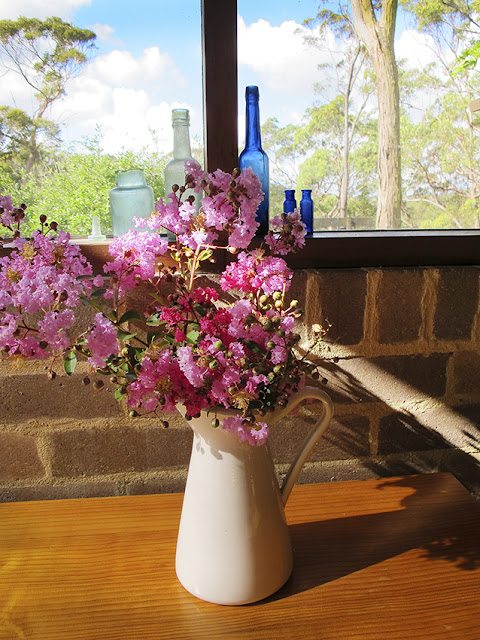 And on my way home, I take a detour to a nearby track through virgin bushland. 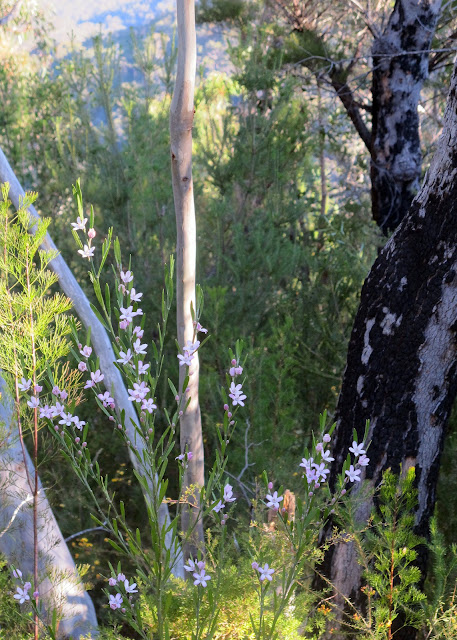 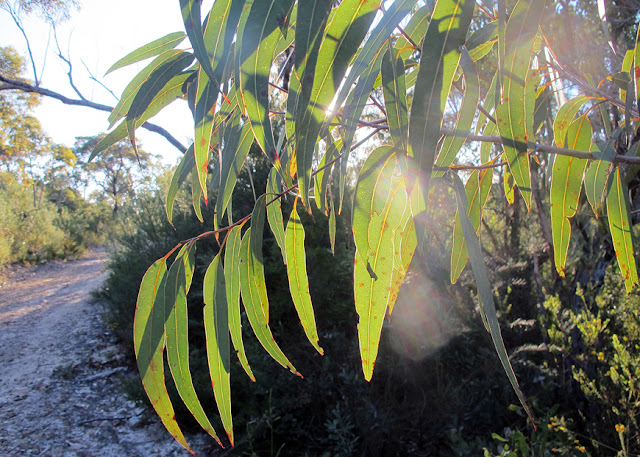 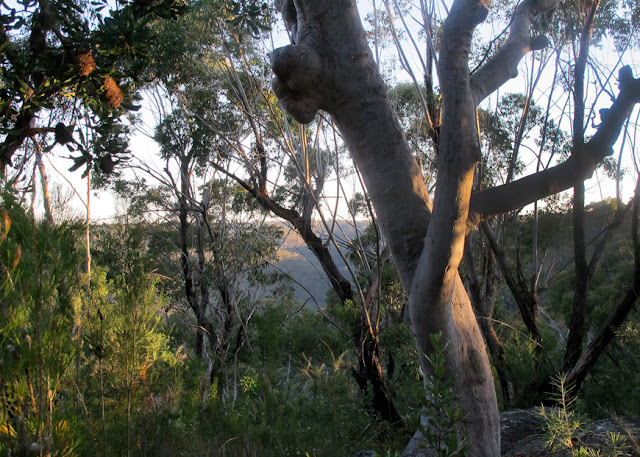 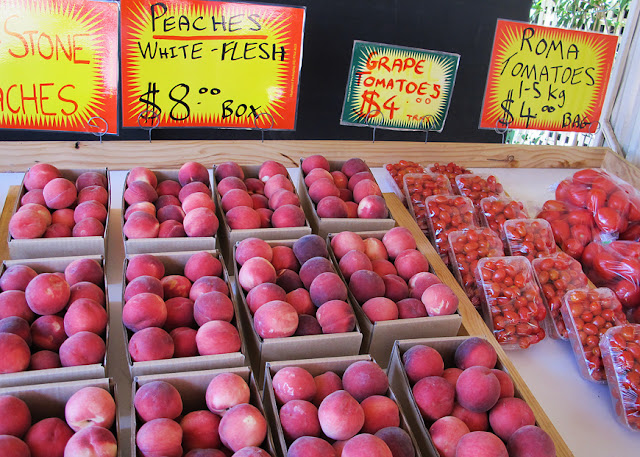 Road side stalls sell summer's bounty, although the figs and pomegranates of autumn are starting to ripen. 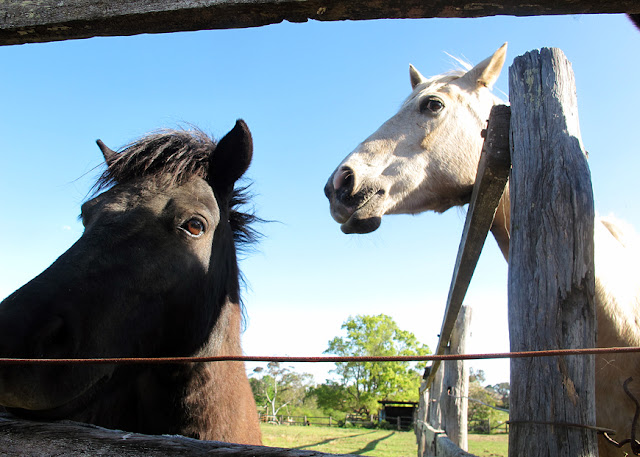 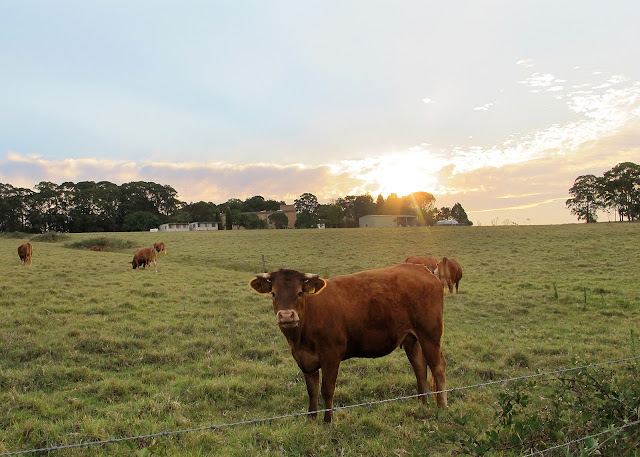